Home / News / Biafra: We have many reasons why we Won’t Vote in Anambra State, On The Upcoming Governorship Elections! – IPOB tell FG 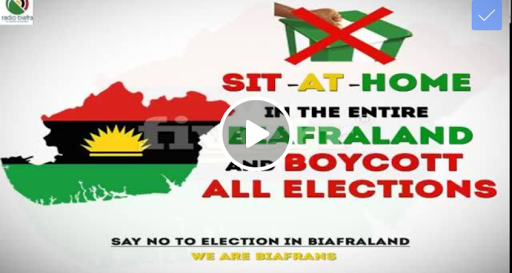 The declaration by the highest command of the Indigenous People of Biafra that any  Nigerian organized elections would no longer hold in Biafra land is a very welcome development. In my opinion, boycotting the elections, especially this impending Anambra State governorship poll on November 18, 2017 would result to a very sad and painful situation to the Nigerian State.
It would be a bigger disappointment to the wicked, crafty selfish Igbo politicians, filthy Ohaneze group and those, who camouflage as Igbo leaders. Their immaturity, reflected in their colossal failure to identify with the people, to provide essential amenities like water, good roads, light, healthcare delivery, education, employment and security of lives and property will not be ignored.
The plan and execution of evil and inhuman agenda against the people they claim to represent will be rewarded very soon by avoiding the polling units.
Their complicity by ushering in the dangerous crocodiles and pythons to dance naked on the streets and major roads at midnight, in military attire, crawling into homes, schools, markets and offices at noon and flooding Biafra land with dead bodies of unarmed innocent citizens will receive due compensation when we totally observe the SIT AT HOME order .
It would be suicidal voting these deceitful leaders again. This contraption called Nigeria is a problem,
we all know that but the Igbo politicians who are too corrupt and selfish are more difficult problem to us. So, the only way to register our displeasure is to boycott all elections, starting with the forth coming November 18 election in Anambra State. Sit at home and enjoy ‘OFE NSALA’.
The boycott would be a very good signal that we no longer have confidence in their acclaimed representation. They were selected and planted to work against us and watch while we groan in pains helplessly. The reason why they hover around us now is the fact that the Nigerian fraudulent and inconclusive electoral system refer them to the people. We are the Indigenous People of Biafra.
We own the land. We are the people they conspired with the Nigerian Armed Forces to forcefully kidnap, kill, rape, maim, hunt and incarcerate. We are the people, they passed unruly, prejudiced judgements, labelled miscreants and terrorists to please their slave masters.
The Ezu river dehumanization of Biafran youths happened in Anambra State. Our youths were summarily drowned and their dead bodies used to feed the crocodiles. The St. Edmund’s Catholic Church massacre where hundreds of Biafran youths, men and women were mowed down in the most cruel manner by the Nigerian Army took place at Nkpor, Anambra State. The midnight killing at Onitsha head bridge, the Ozubulu invasion and killing of worshippers are still fresh.
Nobody challenged it or called for imminent probe. Why must we vote for politicians whose aim is their bellies? For the sake of filthy crumbs, our collective aspiration for freedom was neglected and rewarded with repeated dangerous threats of death and invasion into our lands by the Arewa youths and the military on the orders of Muhammadu Buhari. These selfish Igbo politicians pleased the Arewa youths turned enemies and thereby keep sabotaging our political will to restore our nation.
Our blessed nation, we hope, will stamp out Boko haram masquerading as Fulani herdsmen from purposeful killings, raping , destruction of farmlands. Why should we vote? Shall we continue to vote for the supporters of our killers, those begging for restructuring who have been strangulated and buried in the unhallowed national Hausa-Fulani populated assembly?
Let me state unequivocally that the command to boycott all elections until referendum is given,
stands tall. It would be foolishness to vote those who invited and hopelessly watched Mazi Nnamdi Kanu’s house raided with bullets by the Nigerian Army. Why has none of them asked his whereabout or those gallant youths and visitors killed in that ugly ‘Operation PYTHON DANCE’?
This is because they have rejected the people. For this reason, Biafra has rejected them also. As we prepare to obey the ‘ Sit at Home’ order, the REFERENDUM process, which has been long over due will commence . No vote for those that called us terrorists. Terrorists do not cast vote. We are the Indigenous People of Biafra. Sit at home and enjoy your ‘Ofe Nsala’ as directed.