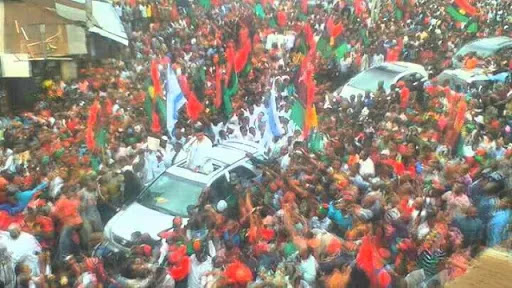 Biafra restoration project remains uncompromisingly sacrosanct, notwithstanding the daily evil antics of the enemies who are bent in thwarting the justified efforts of Biafrans. The struggle, by Biafran citizens all over the world for liberty, equal rights, fairness and justice from the Nigerian tyrannical government can never be compromised.
The attention of Family Writers Press correspondents has been drawn to various News Headlines in the Nigerian Media which alleged that ECOWAS Court has ordered the Nigerian government to pay the sum of 88billion Naira for damages inflicted on Biafrans during the 3 years genocidal war of 1967 – 1970 in Biafra land. This is really laughable and one of the series of the wicked plots between the Nigerian government and the ECOWAS Court of Justice to truncate the agitation for the sovereign State of Biafra.
Family Writers Press correspondents have clinically concluded investigations on the need for Biafrans all over the world, to reject in totality, this ill-conceived token, lined up by a terroristic and genocidal government that treasures in shedding the blood of innocent children, youths, young women, men, mothers and fathers whose only crime is simply, being Biafrans.
Their offence lies in their resolve and determination for total freedom and justice from oppression and denials. The so-called 88 billion Naira compensation can never assuage the pains,
sufferings, displacements, losses and untimely deaths incurred during the war. In the 3 years gruesome war, the entire old Eastern region suffered unquantifiable losses that no amount of money can suffice.
This kangaroo offer by the Nigerian government through the ECOWAS Court is another gimmick to further enslave them by the vampires at the corridors of power. It is a gift that has enclosed package of perpetual slavery, pain, humiliation, victimisation, etc and must be ignored no matter what. It is another entrapping device meant to manipulate and suffocate their greatness.
We hereby advice ECOWAS Court to toe the path of honour and withdraw any plan set in place to alienate the public from acknowledging the many inhuman treatments so far meted against Biafrans by the Nigerian establishment. What Biafrans need is the full and total restoration of their homeland and not the planned bribe of 88 billion Naira in the name of compensation. We do not need it.
Biafrans will remain vigilant and steadfast in the Biafra restoration quest by firstly and massively boycotting the scheduled Anambra State election fixed for the 18th of November 2017 which is tagged “Sit At Home”/”Ofe Nsala Day”.
A WORD IS ENOUGH FOR THE WISE!
Source: THE BIAFRA HERALD