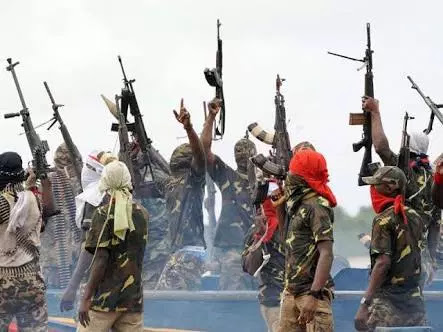 The Coalition of Niger Delta Militants vowed on Saturday to resume its ‘operation show no mercy’ by attacking oil installations in the Niger Delta region.
The latest threat from the coalition is coming barely 24 hours after the Niger Delta Avengers issued a statement that it had decided to resume hostilities in the oil rich region.
A statement by its leader, John Duku, indicated that the coalition decided to attack oil facilities, including pipelines, “because the Federal Government does not have the interest of the Niger Delta at heart.”
It wondered why government used funds that would have been used to develop the region to finance Operation Crocodile Smile at a time the region was peaceful.
The statement read, “All the militants groups in the Niger Delta met today (Saturday) and we have issued a directive that we should go back to our different states, to do everything possible to cripple all the (oil) installations.
“We are going to resume attacks and this time around, it is not going to be business as usual. We have already agreed that when we move in, it will be ‘Operation No Mercy’. Anything we find on our way, there would be no option but to crush it.
“It is not only the installations; we are also going to shut down the offices of each of the oil companies. It is high time the Niger Delta people worked together and declared a Niger Delta Republic. We will be on our own and manage our resources.
“We had already embraced peace. We had already announced ceasefire before the Operation Crocodile Smile came. The exercise (Operation Crocodile Smile) was done in collaboration with top oil firm directors.
“The Operation Crocodile Smile was unnecessary because, there was no crisis in the Niger Delta. But because we insisted the oil companies should relocate their headquarters to Niger Delta before October, the oil companies connived with the cabal in government and they brought the Nigerian Army to the Niger Delta to intimidate us.
“The directive on the relocation of oil companies’ headquarters came from the Vice-President, but they (oil companies) refused to relocate.
Government should have used the money spent on Operation Crocodile Smile for the development of Niger Delta.”
The coalition also hailed the Niger Delta Avengers for what it described as its bold step in making a declaration on behalf of the Niger Delta people.
According to the group, it can no longer be patient since the Federal Government refused to implement the 16-point agenda for the growth of the oil-rich region.
Meanwhile, the Ijaw Youth Council has called on the Federal Government to be sincere with issues concerning the region in order to avoid a situation where militant groups would resume the destruction of oil facilities.
IYC President, Mr. Eric Omare, told SUNDAY PUNCH in a telephone interview that though it was necessary for the Niger Delta Avengers to embrace dialogue, government should also fulfill promises made to the people of the region.
Omare explained that the Federal Government must allow Niger Delta people to have a stake in the oil that was found in their environment.

Ghen Ghen!!! Avengers are playing with us, this time around we are going to their Creeks and waterways to wipeout Niger Delta Avengers – Nigeria Soldiers Brags