Home / News / Breaking: Despite Unity Nigerians Should Discuss Issues Affecting Them – US Envoy

Breaking: Despite Unity Nigerians Should Discuss Issues Affecting Them – US Envoy 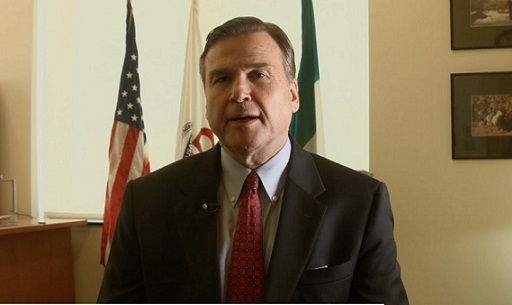 United States of America Ambassador to Nigeria, Stuart Symington, has reiterated his country’s belief in the unity of Nigeria, even as he said Nigerians should be free to discuss issues affecting them.
This was as Governor Abdullahi Ganduje of Kano State said Nigerians must respect the diversity of the country.
In a goodwill message to the 2017 Annual Federal Radio Corporation of Nigeria (FRCN) Lecture, titled: “The Role of the Media in Promoting National Unity and Productivity,” Amb. Symington, represented by the Embassy spokesman, Russell Brooks, urged Nigerians to eschew hate speech and violence.
He added that the future was very bright for Nigeria as a united country.
“The United States feels very strong that Nigeria has a very bright future; and we hope Nigerians feel the same way. The ambassador said time and time again that the great resource in Nigeria; are the Nigerian people.
He has also said time and time again; that Nigeria; Nigerians should have the freedom to debate the important problematic issues in the country but they should do so within the context of unity; that there is no place for hate speech, no place for threat of violence, there is no place for violence,” the envoy stated.
Ganduje, who was chairman of the occasion, supported President Muhammadu Buhari’s recent position that Nigerians; particularly online media purveyors and bloggers had actually crossed the red lines in the last eight months; a situation, he blamed on vested interests.
Noting that peace would not come by accident; he said all efforts must be channelled towards using the media to promote peace.
The governor disclosed that it was in recognition of the diversity in the country that his administration initiated inter-religious conference, to enable the various religions; particularly Islam and Christianity, interface and engender peace, unity and tolerance.
In his presentation, the guest lecturer, Dan Agbese posited that so much power was being ascribed to the media, noting that the media can only play supportive role in any society.
Agbese also said that the media was the mirror of the society; hence, their fundamental role in national unity was to tell the truth.
According to him, “When things go wrong, the media become the whipping boy; but the media don’t do things; they promote things”.
He therefore, warned that the media can only be partners with nation builders, if they were not repressed.
Regardless, the former Managing Director of the defunct Newswatch magazine; said national unity can be achieved through justice and fairness.
Director General of FRCN, Dr. Mansur Liman on his part, urged Nigerians to use the media for conflict prevention and peace building.