From the table of family writers:
Great Biafrans! 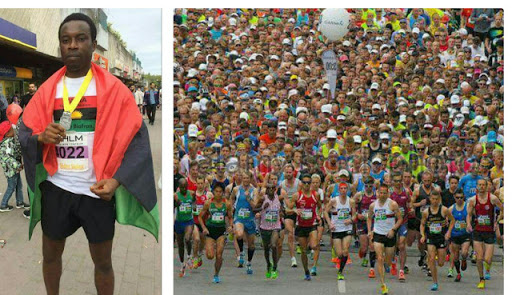 In the just concluded Stockholm marathon that took place in Sweden, a great Biafran, by the name Arimah Chudi Nnamdi, was among the few people that made it to the first position. Biafrans are very talented people. They are creative and are quite industrious in all ramifications. Any deputation?
Put them anywhere, even in the desert, they’ll eventually turn it around as a viable and formidable environment.
Millions of Biafrans, like this great guy are languishing in one almighty contraption called Nigeria. Our collective ingenuity & greatness is being trapped and caged, because we’re being forced to bear Nigerian identity, against our wish. A lot of great talented young stars–are going through one frustration or the other in this unworkable union. Every one of them is unarguably desperate to leave for greener pastures, in the western world & other working countries. The rich are getting richer, while the poor are getting poorer. The political arena is full of political criminals & harlots. Their politicians loot billions of dollars meant for the masses with flagrant impunity. The plutocratic cabals, have succeeded in forming a very strong chain around themselves, with the looted resources meant for all.
Biafrans are being killed because they’ve refused to deny their original identity as Biafrans.. We are Biafrans and not Nigerians. Biafra, had been existing for thousands of years, before the fraudulent creation of Nigeria, by the British thugs. They British never created Nigeria to work..it was for their selfish whims and caprices. We want to go back to who we were before the British created this evil monster called Nigeria. We want to restore dignity & respect to black race.
region in the present contraption called Nigeria, have what it takes to set a wonderful pace of good governance & accountability, if the chain covering those wicked cabals, are eventually broken. And we must break it. The restoration of Biafra is inevitable.
All hail Biafra.

Shocking: Man faked his own murder after wife hired hitman to kill him