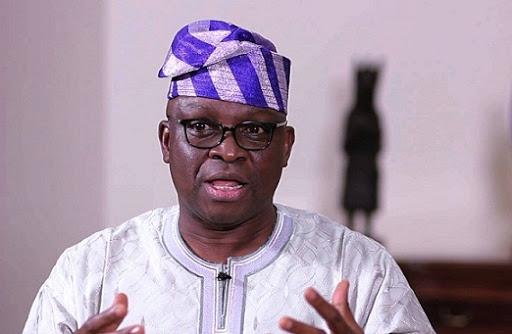 Governor Ayodele Fayose of Ekiti State has pleaded with the United States of America to pay keen attention on the 2019 general elections in Nigeria.
The governor also told the country that the major problem retarding the growth of the country was poor attitude by the people and the insincerity of leaders.
Fayose spoke when the US ambassador to Nigeria, Stuart Symington visited him at the Ekiti State Government on Tuesday, lamenting a situation where those claiming to be fighting corruption did so with some people being their targets.
He also decried the various intimidation, harassment and illegal detention of Ekiti government officials by ruling federal government agents.
He said, “Our greatest challenge is not corruption but insincerity of leaders. Those claiming to fight corruption are not sincere. Without justice, we can’t move forward. There must be equity in the way we do things. Being selective in the fight against corruption will not take us anywhere.”
Speaking on his presidential ambition, Fayose assured the U.S envoy that he is eminently qualified to rule the nation, adding, “I have the required experience to lead this country. I have worked with the presidents we have elected into office in this country and am able to manage the economy of my state despite lean resources.
“In the US and the UK they ask you your experience when seeking for a job not your paper qualifications. I have managed a poor economy in my state and that shows my ability to deliver.
“We are in firm control and the people are in our support. We just want to appeal to America and the international community to keep an eye on the poll.
“We don’t want INEC to come to our state with preloaded card readers or manipulate the process. We are sure to repeat the victory of 2014 when we won on all local government areas.”