Anambra Election Has Been Fixed, IPOB Can’t Stop It – Police

Following the Friday road march by members of Indigenous People of Biafra (IPOB) in Onitsha calling for boycott of the November 18 Anambra State governorship election, the police command in the state yesterday said the proscribed group cannot stop the governorship election in the state.
The Commissioner of Police, Mr. Garba Umar, who spoke through the State Police Public Relations Officer (PPRO), Nkeiruka Nwode (ASP), on the IPOB protest and its call, said the group’s action amounts to nothing as the State Police Command was on top of security situation in the 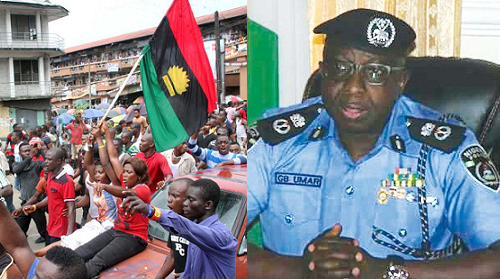 state.
Nwode said: “Some IPOB members were seen in Onitsha distributing leaflets, saying the November 18 poll would not hold. But the IPOB march was of no effect as the police in the state had concluded arrangements for effective policing of the state during the election.
“INEC has fixed the election and it must hold. Nobody or group can stop it,” the PPRO said.
She assured the people of the state of adequate security during the poll, and asked them to go out en masse to exercise their franchise on the day of the election, stressing that their security would be guaranteed.
IPOB members on Friday took to the roads and streets of Onitsha and its environs to campaign against next Saturday’s Anambra state governorship election.
The group marched along major roads such as Awka road, Old Market road, New Market road to Main Market as well as to Oguta road Upper Iweka to Owerri road, saying that there would be no election in Anambra state and Biafra land pending the conduct of referendum for the exit of Biafra people from Nigeria.
They held Biafran flags and distributed handbills with inscriptions such as “IPOB call for referendum is not call for war, Biafra Exit, ‘Our Mumu Don Do’, No election in Anambra, ‘No election in Biafra land, sit-at-home, etc.”
One of the members who gave his name as Ogbonnaya said that the reason the people of Biafra should not vote was because the system was skewed in favour of the North, stressing that voting would not change anything.
“Whether you vote or not, it does not change anything, whoever gets there will swear allegiance to the Fulani slave book called constitution and immediately becomes a demon against his people. We need to boycott the elections to avoid giving their government legitimacy and the only presence of federal government in Nigeria military and police.
“Tell them that we are not miscreants, touts, criminals, toothless bulldogs as they branded Biafrans. Tell them that the genuine power belongs to the people and we are withholding it for good and for the sake of our freedom,” Ogbonnaya said.
The group however warned anybody that would come on the Election Day to vote should take whatever comes out of it.