IPOB: Reasons Why Biafrans Insist On Boycotting Of Election In Biafra Land 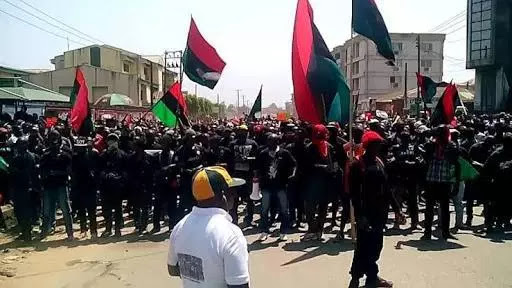 To the unenlightened, it is a puzzle to really determine the rationale behind Biafrans’ unrelenting wave of agitations for freedom, restoration and sovereignty of the Biafra nation from Nigeria after years of “Paper Independence” from British colonialism.
Different Nigerian regimes from 1967-2017, have through all crafty and most inhuman strategies, fruitlessly tried coercing Biafrans to jettisoning this noble course.
It becomes then almost difficult to explain the spirit  behind the resolve and the resilience of these promising young Biafran men and women of different standing who very unrepentantly stake their destinies in justified peaceful civil protests in various cities and towns. 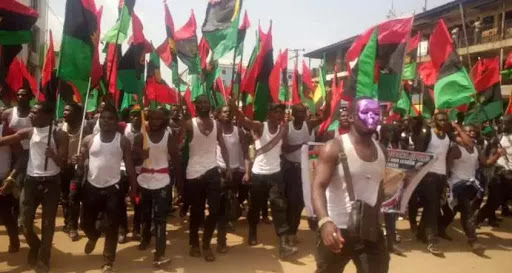 They have undoubtedly taken bullets over time from the unprofessional and murderous Nigerian security operatives made up of the Army, Navy, Department of Security Services (DSS), Police and Special Anti-Robbery Squad (SARS).
So many have been killed, maimed and incarcerated. And contrary to the catalog of state – sponsored mayhem and wickedness steadily carried out against these fearless individuals, they are yet surging on.
Without any atom of doubts nonetheless, it is pertinent to state here that these set of Biafrans have enough reasons in their kitty why this agitation must be brought to it’s logical conclusion in a restored Biafra.
Nigeria as a country, has over the years, woefully failed to guarantee  the overall welfare and well-being of her supposed citizens by every standard.
The lopsided sharing of the so-called “National Cake” to the detriment of Biafrans, remains grossly unabated. Biafrans since pre-independent years of Nigeria, have enormously sacrificed to preserve the unity of country with absolutely nothing positively tangible to show for it outside victimization, enslavement, injustice, deception, impoverishment and death.
Nigeria is a negation of a just society where the economic, academic, health and other fundamental cum beneficial concerns are given utmost importance, which of course are made possible through the instrumentality of a vibrant democracy where true representatives of the people are purely elected.
In Nigeria it is not so. This is a country where selection of cabals, vampires and oppressors by the Hausa-Fulani oligarchy who lay claim to Nigeria ownership, all in the name of elections, dictate the tone. The choices and will of the people are never recognized.
It is therefore foolhardy for anyone especially a Biafran, to keep on going to the polls in an enclave like Nigeria to cast his or her ballots when such will never count nor influence any change when the political godfathers who have constituted themselves as principalities are there. Therefore, conducting elections in Biafraland in the light of the prevailing circumstance, amounts to futility.
Now exists the time for us to pull ourselves together as Biafrans by maximising our efforts and cooperation in our campaign for massive boycott by our people, in the upcoming November 18th Anambra state gubernatorial election just like what happened in the last Enugu state Local Government chairmanship election. All that we need is United Nations organized referendum to really determine our future as a people in the contraption called Nigeria.
Biafrans in Ebonyi state set the ball rolling early this year by boycotting the state’s chairmanship election. That is how resolute we are in showing our dissatisfaction and unwillingness to be part of lawlessness and falsehood.
We are enjoined therefore, as passionate disciples of Mazi Nnamdi Kanu and the leadership of the Indigenous People of Biafra (IPOB) worldwide, to obey the “Sit At Home” order on Saturday the 18th of November 2017, being the scheduled date for Anambra gubernatorial election. Our days of enslavement in Nigeria are really over.
Let us not retreat nor surrender!
Long live Biafrans!!
In unity we can achieve our purposes!