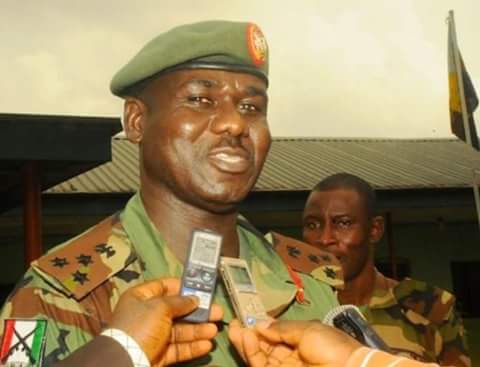 Tukur Buratai, chief of army staff, says soldiers pursued a truck loaded with weapons into the family home of Nnamdi Kanu, leader of the Indigenous People of Biafra (IPOB), in Abia.
In September, several people were said to have been injured after soldiers and members of IPOB clashed in Kanu’s family home.
The army later raided the house and since then, Kanu’s whereabouts remain unknown.
Thereafter, Ifeanyi Ejiofor, counsel to the IPOB leader, filed a suit at the federal high court, Abuja, seeking an order to compel Buratai to produce his client.

In the suit, IPOB claimed the army took Kanu away.
But in a counter-affidavit, the chief of army staff said Kanu has never been in the custody of army.
He said the truck laden with weapons was “deliberately ignited” by IPOB members after soldiers tried to arrest its fleeing occupants.
“During a peaceful movement which was part of the Operation Python Dance II on September 14, some soldiers saw a truck and flagged it down, but the truck and its occupants ran over Army’s barricade and defied soldiers’ order stopping them to be searched,” Buratai said in the affidavit seen by The Nation .
“It was the legitimate attempt by the officers and men of the Nigerian Army to arrest the fleeing occupants of the truck and impound the truck that precipitated the deliberate igniting of the ammunition in the truck by persons now believed to be IPOB members.

“The act of the IPOB members resulted in sporadic explosions within the said applicant’s compound. The applicant (Kanu) is not and has [never been] in our custody nor in the custody of any person, officer or institution receiving instruction directly or indirectly from him.
“The applicant was not at any time whatsoever arrested, taken into custody or detained by the officers and men of the Nigerian army.
“The officers and men of the Nigerian army did not have any contact whatsoever or confrontation or any operational engagement with the applicant on September 12 or 14, 20l7 or any other date thereafter, contrary to the allegations in the affidavit in support of the application.
“The allegation of invasion of the south-eastern part of Nigeria by officers and home
of the Nigerian army, especially the applicant’s home and or residence is totally false.”

Facebook Comments
Loading...
Related Items
← Previous Story Igbos Forgetting Biafra, Is like Forgetting Your origin, We will never in life abandon Biafra no matter the circumstances – Ikedife Tell Buhari
Next Story → The boycott of Anambra election, is just the beginning of the end.