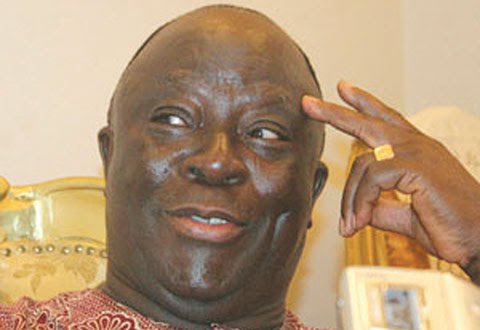 Nnamdi Kanu Was Called A Terrorist Because He Wanted Justice – Top Yoruba Leader Ayo Adebanjo Speaks As He Supports Kanu.
Chief Ayo Adebanjo has said that the leader of the Indigenous People Of Biafra (IPOB), Nnamdi Kanu was called a terrorist because he wanted justice. Chief Adebanjo was one of the delegates to the 2014 National Conference and an elder statesman.
Chief Adebanjo said this in a chat with Punch, where he disclosed that “Nnamdi Kanu is called a terrorist today because he wants justice for his people.”
His said: “He claimed to be a born – again democrat when he was contesting the presidency. Buhari will not bother to restructure the country because his people are the beneficiaries of the lopsidedness in the country. Buhari only sent the 2014 National Conference report to the National Assembly because he was pressured to do so.
“He has no interest to restructure. The confusion Buhari and APC are creating about restructuring shows that they are taking the people for granted. How can they be asking what restructuring is? It was made as part of their manifesto. The APC is doing all it can to confuse the people.
“Nnamdi Kanu is called a terrorist today because he wants justice for his people. The military put us where we are today. I am a Kanu man; where I don’t agree with him is the use of force.”
He went further to say that: “All the South – West governors are in support of restructuring but they are afraid of the dictatorial tendency of this present administration. We had a conference in Ibadan recently; all the governors contributed morally and financially. They couldn’t come but they sent their deputies.
“If Buhari is honest and interested in the unity of this country, why didn’t he have a dialogue with Nnamdi Kanu? Buhari will not listen to the voice of reason because he has an element of force in him. If Buhari is honest, why didn’t he call for a dialogue? Why are people agitating for a secession? It is because the government has refused to restructuring the country.

Biafra: Our Referendum will prove to you that Biafra is not dead but alive – IPOB Tells FG