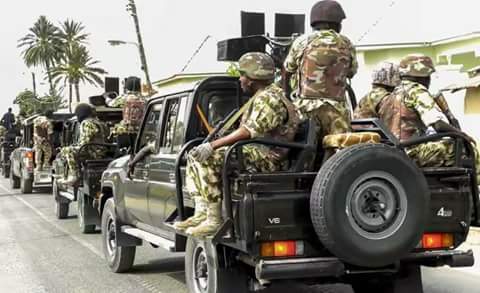 THE Chief of Army Staff, Lt General Tukur Buratai, Friday, hinted that the Nigerian Army would soon deploy personnel to various parts of the country to contend ongoing threat to security in the country.
==========================
IF YOU CAN’T LAST 2MINUTES OR WATERYSPERM, TRY Bitter Kola and Watermelon Seed (Every Man Needs This!) THANK ME LATER
===========================
He said the troops will be deployed under special forces like Operation Python Dance III in the South East, Operation, Operation Crocodile Smile III in the Niger Delta and South West and Harbin Kunama III in the North to contend cattle rustling in that part of the country.
To this end, he tasked officers and men to be on alert as they could be deployed any moment when there was any for that.
The Army chief spoke in Abuja, Friday, after leading personnel on an annual 15 kilometres route match that culminated at the Mogadishu Cantonment, Abuja.
Reiterating that some officers and men could be deployed at short notice to assist what he called ‘civil authorities’ to contend insecurity in any part of the country, Buratai charged the troops to be prepared for the task.
Recall that Operation Python Dance I & II, Operation Harbin Kunama I and II were among others were conducted in 2016 and 2017, respectively, to deal with the menace of cattle rustling and herdsmen/farmers clashes in parts of North-West and North-Central while Crocodile Smile and Egwu Eke Dance were conducted in the Niger Delta and the South-East, respectively, in 2017 to tackle pipeline vandalism, oil theft and piracy, violent agitation and kidnapping.
Buratai could not however give a clear picture on whether the Army would carry out similar exercise in Benue, Taraba and Nasarawa following incessant herdsmen/farmers clashes in those states which have resulted in several killings.
He said:“Well, we are not thinking of any particular situation, we are going to train on general areas which could include that aspect (Benue killings) as well.
“But our focus will be to ensure that security is provided across the country.
“So, definitely, expect Harbin Kunama III; Crocodile Smile III and Egwu Eke Dance III and probably another exercise coming which will be made known at the appropriate time.’’
Facebook Comments
Loading...
Related Topics:
Up Next

OPEN LETTER TO BIAFRANS: PREPARE FOR YOUR REFERENDUM TO EXIT NIGERIA (BIAEXIT)