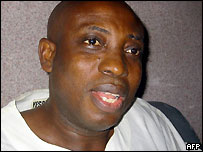 — Uwazurike had earlier described Igbo as the most foolish tribe in the world
Reacting to the assertion, the OYC, through a statement made available to its national president, Mazi Okechukwu Isiguzoro said it received with deep shock “the misguided and ridiculous statement credited to the leader of Biafra Independent Movement, and former MASSOB leader, Chief Ralph Uwazurike.”
It said contrary to Uwazurike’s statement, Ndigbo were the most enterprising tribe in the world.
The OYC said it was a sacrilege and abomination that “a so-called freedom fighter who rose to the height of leading Igbo Nation, is now a saboteur fighting his root openly without shame; it’s a signal that his end as a freedom is near.”
The OYC added in the statement that “as part of our efforts to cleanse this mess from Chief Ralph Uwazurike, we have declared him persona-non-grata in igbo land.
“He should vacate immediately from Owerri, to perhaps to Kano where his paymasters are residing. Failure to do, he will have himself to blame.
“Ohanaeze Ndigbo Youth council worldwide will strip Chief Ralph Uwazurike naked anywhere we catch him if fails to vacate immediately from igbo land until the gods are appeased.
“This will serve as example to other shameless self-serving Igbo elders, who are trying to mortgage Igbo Land to their Fulani paymasters ahead of 2019 elections.”
“OYC will henceforth will not tolerate any rascality by any elder in the South-East.
“It was the same Uwazurike that deceived Ndigbo against participating in the last population census, that has today made us minorities in the Nigeria project.
“We call on Ndigbo to ignore the ridiculous statement credited to Ralph Uwazurike, and urge anybody, especially the youths who sees Ralph Uwazurike to strip him naked and give him 36 strokes of cane as a reward for over 2000 youths that died during his reign as MASSOB leader before his expulsion.
Facebook Comments
Loading...
Related Topics:
Up Next