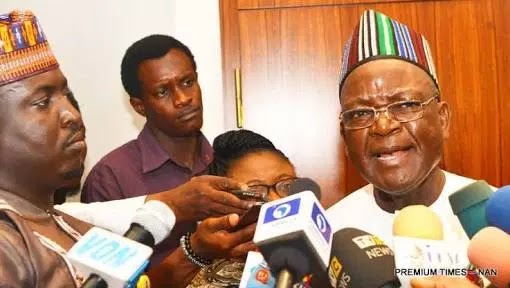 Benue State governor, Samuel Ortom has called on the people of the state to brace up to defend themselves in the face of incessant killings by the herdsmen.
The governor who spoke on a radio programme titled, ‘issue of the moment’ monitored by our correspondent on Tuesday said that it was necessary for them to do it in a legitimate way so as not become easy prey to their killers.
Governor Ortom noted that in spite of the presence of policemen in the state, killings were still on-going in the two local government areas.
He regretted that the statements credited to the Inspector General of Police, Ibrahim Idris blaming the anti-open grazing law for the new year attacks has rather encouraged the herdsmen to continue with their attack on the state.
He also lamented the inability of the security operatives to stop the killings and arrest the killers as well as the perpetrators of the New Year killings.
The governor explained that despite the presence of police, the killings in the state was yet to cease, expressing doubt of compromise among those who were supposed to provide security to the people of the state.
According to him, “It is because we are law abiding, that is why we are being attacked daily”, adding, “you need to listen and hear the opinion of the people of the state on the matter”.
“I think the people should have the right to defend themselves and not make themselves easy prey to be killed in their homes.”
“So any lawful means, you can adapt to defend yourself just go ahead in Benue state. We are not going to wait for the Inspector General of Police, IGP, to do it.”
The governor commiserates with families of the police personnel who were killed in the cause of carrying out their official duty in the state.
“It is unfortunate, the police are dying and the Inspector General of Police is playing politics with the issue.”
“The man should resign because he has failed woefully. He doesn’t have the capacity.”
“There are many good police officers who can take over that job and perform creditably by turning around the security architecture of this country and make this thing work and protect lives and property. That man has no business being the IGP,” Ortom lamented.
Facebook Comments
Loading...
Related Topics:
Up Next