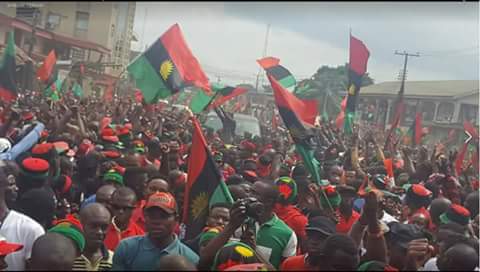 THE Indigenous People of Biafra, IPOB ,has decried what it called the gross insensitivity of those at the helm of national security affairs over the alleged arrest of Mr. Bur Dooior, the Divisional Police Officer, DPO, in charge of Gboko Police Station, Benue State. IPOB in a statement by its Media and Publicity Secretary, Emma Powerful, said the kind of injustice meted on the DPO, said to be of Tiv extraction in Benue State, where  Fulani herdsmen on the eve of the New Year murdered 73 people, could only be obtained in Nigeria, where reason and common sense are always in short supply. IPOB said: “It did not come to the leadership and members of the Indigenous  People of Biafra, IPOB, worldwide as a surprise that the Divisional Police Officer, DPO, of Gboko Police Station in Benue State has been arrested for failure to use police resources to protect invading Fulani herdsmen. “This perverse injustice and logic can only be obtained in Nigeria where reason and common sense is always in short supply. We condemn the criminal silence of the weak  majority and those that claim they are leaders of the various socio-cultural organizations that litter the political landscape in Nigeria. “This present administration can do itself  good and save its battered image by sacking without further delay , the Inspector General of Police for this latest  embarrassment to Nigeria.” According to IPOB, “it is unheard of and a shame that the Inspector General of Police will approve the arrest of Mr. Bur Dooior, for alleged failure to use Police apparatus to protect invading  herdsmen, and we dare to ask whose interest he is protecting. The president’s or Nigerians’ interest.? “The humiliating arrest of  DPO, Bur Dooior, a Tiv of Benue State, is indicative of the crass insensitivity of those at the helm of security decision making in Nigeria. Had the DPO been a Fulani man, he would not have been arrested. In Nigeria today, there is one law for Fulani people and another for the rest of us. “It will be recalled that  few days back at the height of the genocide in Benue State, President Muhammadu Buhari told Nigerians that he was not in a hurry to take action, including against his kinsmen who have been killing and maiming Nigerians. “We are shocked that suddenly, the death of seven Fulani terrorists who hide under herdsmen has spurred the presidency into action. Those in doubt about the real motive of this administration can now see it very clearly that seven  herdsmen’s lives are more valuable than that of 73 lives they wasted in Benue state. “Now, even the most vocal defenders of the brutal Fulani herdsmen cannot excuse this blatant apartheid going on in Nigeria, since the continued killing of innocent people in the country by  terrorists hiding under the name of    herdsmen, supported by their kinsmen in the Police and military, the IGP and heads of other security apparatus who never deemed it necessary to send their officers and men to protect lives or punish officers for not protecting the lives of the 73 people killed in Benue State and other states. Instead, they sent soldiers and Police to protect killers of innocent people. “Why should anybody order the arrest of a non-Fulani DPO because of the death of 7 Fulani terrorists herdsmen? Why are the neighbouring Police stations manned by Fulani DPOs being promoted even when the greatest killing happened under their watch?”
Read more at: https://www.vanguardngr.com/2018/02/ipob-flays-arrest-gboko-dpo-bur-dooior/
Facebook Comments
Loading...
Related Topics:
Up Next