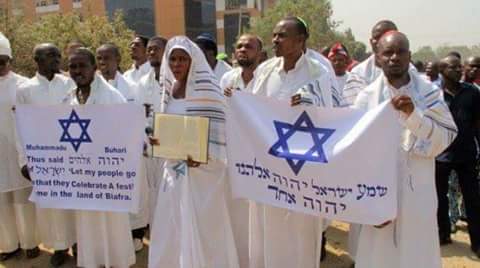 Pro-Biafra activists arrested in Enugu… (File photo)
Ogbonnaya Ikokwu, Umuahia
Police have arrested and subsequently paraded some Biafra activists in Aba, Abia State.
It was gathered that about seven Biafra activists were arrested in a Jewish synagogue in Aba during a prayer meeting.
A Police source said the men were holding “illegal meeting,” an allegation which the men refuted, saying they were only praying in the synagogue before they were arrested.
Commissioner of Police in the State, Mr. Anthony Ogbizi, had, while parading the suspects on Monday in Umuahia, said they were arrested with IPOB and Biafra insignia, arguing that IPOB remains an outlawed terrorist organisation.
He said IPOB members had devised new strategy to further their agitation for Biafra by joining the same religious group of their leader, Nnamdi Kanu, and using their synagogue as a clandestine meeting place.
Asked why Police also paraded some members of Biafra Independent Movement since the organisation is not proscribed, Ogbizi said if they did something contrary to the law, they would also be arrested.
He said the police would not allow any part of Abia to be used as a “breeding ground for terrorists.”
But irked by the development, Ohanaeze Youth Council has called for the immediate release of the Biafra agitators, insisting they have committed no offence to be paraded as criminals.
National President of OYC, Mazi Okechukwu Isiguzoro, said Police had no moral justification to arrest peaceful agitators seeking self determination, whereas armed herdsmen have continued in their killing spree unchecked.
Isiguzoro urged the security agencies to go after “murderous herdsmen” who are “known terrorists committing genocide across Nigeria,” instead of dissipating energy on non violent agitators
Facebook Comments
Loading...
Related Topics:
Up Next