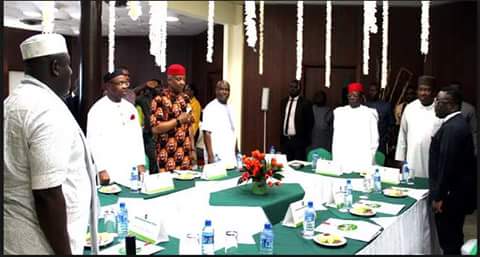 Global Igbo Alliance (GIA), a conglomerate of Igbo associations around the globe has rejected the planned imposition of cattle colony on states by the Federal Government of Nigeria, warning the southeast governors against accepting such plans in Igbo land. *Cattle The group, in an open letter to the southeast governors, signed by its president and secretary, lamented that herdsmen, who currently assumes number four in the world terrorist index are being treated with
kid gloves, even as they continued to kill Nigerians in their hundreds.
The letter read: “Lamentably, the killings and ethnic cleansing are still going on in Nigerian and President Buhari`s government appears complicit with the atrocities of this terrorist group by choosing to treat them and their cows with kids glove. “Global Igbo Alliance is calling on the entire Igbo nations, Eastern state governors, politicians and Igbo leaders of thought as well as their western counterpart to vigorously resist the cattle colony plan. It is a dangerous and ill-advised step by the Federal Government. Even the former military President Ibrahim Babangida has reportedly warned that President Buhari should not let personal ambition override national interest.”
The group condemned the president’s silence over the killings saying, “It is wrong to allow herdsmen to continue to kill innocent Nigerians. It is incomprehensible that President Buhari`s government has refused to apply the same level of force it applied to the Indigenous People of Biafra (IPOB) on the Fulani herdsmen, despite their atrocities in Nigeria. The killings, maiming and massacre of innocent citizens, including women, both pregnant and nursing mothers, children, and men are so brazen and beyond imagination. It presents Nigeria under Buhari government as a barbaric and dangerous place to be in. “We condemn this systematic ethnic cleansing going on in Nigeria and points that the murderous activities of herdsmen is what will lead to civil war, and not the agitation for Biafra or regional autonomous government now being proposed by very many Nigerians across the nation. “The current government appears not to see human life as sacred and superior to all things and must never be equated to a cow. Regrettably, it is only in current government that cows are valued more than human beings”, the statement warned. The group charged the current government to display equity and fairness by declaring the herdsmen a terrorist organisation and treat them as such, noting that since the atrocious activities of the herdsmen started, people have raised many pertinent questions, which have remained unanswered. “For instance, why would the herdsmen be allowed to openly carry sophisticated and heavy weapons, such as AK47 which costs over N3million? Why would they be attacking at will and with impunity? Who are sponsoring them? Who are behind them? Why would a group which has been identified by the world terrorism index as the fourth deadliest terrorist organization not identified as a terrorist group by the current government? And why should government trivialize their atrocities?” GIA pointed out that the murderous activities of the herdsmen was already getting to a boiling point, adding that any plan proposed by the government that was short of criminalizing the herdsmen activities could not be a panacea to the menace. The group described as very shameful, insensitive, discourteous the statement credited to the minister of Defense, Rtd Brig-Gen Mohammed Dan-Alli that the killings was caused by the enactment of the anti-grazing laws by some states and the unwillingness of the affected communities to accommodate their fellow Nigerians, stressing that such statement by a government official shows no respect to the families of those killed by Herdsmen. GIA therefore warned the southeast governors, saying, “Our Eastern States governors and Igbo leaders of thoughts should note that no cattle colony will be entertained in Igbo land, because doing so will be tantamount to going on a suicide mission. “The so called cattle colonies are not in line with international best practice for cattle rearing. Therefore, it makes no common sense trying to establish the cattle colonies in Igbo land and all eastern states. If colonies must be created, the colonies can be created in the states where the herdsmen come from. “We wish to warn all the Eastern States governors, politicians, Igbo leaders of thought to stay away from escalating the problems of Igbo people by not succumbing to pressure of the Federal Government regarding the so cattle colonies or grazing bill for the herdsmen. “The massacre in Nimbo, Uzo-Uwani Local Government Area of Enugu state by herdsmen is still fresh in mind and remains unsolved, with none of the perpetrators ever prosecuted or brought to book. “Herdsmen, by all intents and purposes, are a terrorist organization and have been globally declared so. We therefore call on the eastern states leaders not to entertain terrorists in our states but to put pressure on the Federal Government to declare herdsmen a terrorist organization and treat them so.”
Read more at: https://www.vanguardngr.com/2018/02/igbo-group-rejects-cattle-colony-warns-southeast-governors/
Facebook Comments
Loading...
Related Topics:NdigboNews
Up Next