NIGERIANS MUST APOLOGIZE TO NNAMDI KANU 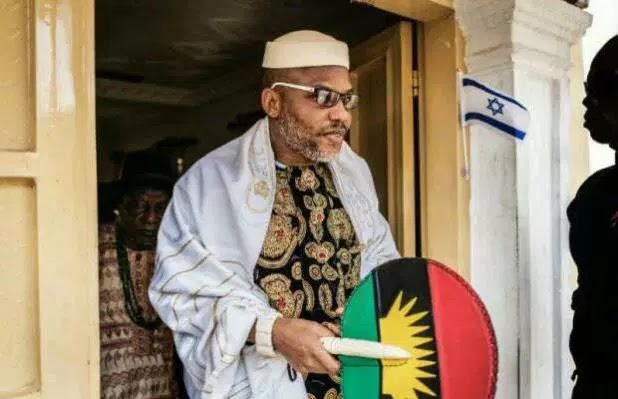 It is with utmost love, care, respect and immense concern that I am sagaciously constrained to make this clarion call to you all. The present political journey which Nigeria is apparently navigating through has warranted the spontaneous articulation of this call.It will amount to a very great disservice if I should fail on my own part to beckon on those Nigerians who wittingly and unwittingly orchestrated the yanking of Nnamdi Kanu from his abode for preaching a typical gospel that simply infuriated some mischief makers to apologise to him!Surprisingly, what Nnamdi Kanu was preaching about Nigeria has manifested even beyond expectations. History invariably has a way of repeating itself. In his various broadcast of 2014 and 2015, he made prophetic and startling statements that have been able to stand the test of time. Words and prophesies that have proven not only to be true but that genuinely comes from a rare specie of prophet.Before his illegal adoption by the Nigerian military, Nnamdi Kanu was always on a constant and heavy verbal attacks ( apart from the ones instigated by the government ) from millions of Nigerians ( both learned and hawkers on the street ) who defiantly refused to see beyond the scope of their thinking cap.They called for the head of Nnamdi Kanu for daring to challenge the status quo.  In their wildest dream, they never knew that a day like this will come. A day that someone with lion heart and fist will emerge to question this shared criminality called Nigeria. Millions of Nigerians were short sighted. They accused him of fanning the embers of war and hate.This led to a premeditated gang up against a saviour that saw the future.Nnamdi Kanu in his numerous broadcast called Buhari a tyrant, a blood thirsty feudal overlord and a terrorist. The last two years of Buhari’s administration has vindicated Nnamdi Kanu and his bold assertions. Buhari as a despotic leader has brazenly shown his disdain for democracy and clanish dispositionA man that doesnt have respect for the rule of law. He relegated the federal character principle in appointing his cabinet members. As a jingoist enmeshed in ethnic bigotry, he blatantly appointed his family members and other incompetent cronies from his clan into sensitive positions of the government without any recourse to merit and competence. A ruthless and marauding feudalist that thrive on killing and intimidationNnamdi Kanu on the 14 October 2015 made the following prophetic statements:“As they campaign vigorously for elections, you would think, they are coming to grow the economy, enthrone justice, breed unity and tolerance, love for one another.

No, they are coming to elevate Hausa-Fulani supremacy, to reposition the security agencies by sacking all competent hands and replace them with their kinsmen to drive their ethnic domination of the Biafrans, the Fulani herdsmen will be armed and encouraged to slaughter us with impunity, and their masters will protect them.

They are coming to ensure that my people are enslaved forever. Those who do not, believe me, will soon see it happen before their eyes.”The above prophetic statements have been fulfilled. Today, Benue State has become a slaughterhouse. Hundreds of people have been decimated, butchered and displaced from their ancestral homes by the Fulani terrorist organisation without anyone raising an eyebrow. These marauding beasts, armed with AK 47 Kalashnikov operate with so much audacity and heavy state protection. They have raped both the young and old, destroyed homes and farm lands worth billions of naira. A state sponsored terror movementMore pathetic to the whole scenario is that, all the strategic security positions in Nigeria ( The police, Army, Dss, civil defence, airforce, Ndlea, Customs, Immigration and Navy ) are presently occupied and controlled by the Fulani’s. Other ethnic nationality have been subjected to play a fiddle role.Time and events have truly proven that Nnamdi Kanu is a rare specie of prophet. He saw what millions of blind Nigerians who condemned and hated him could not seeIn Nigeria today, we have a government manned by ethnic supremcists.They see themselves as lords. Other ethic extraction is seen as inferior and worthless and should not be engaged in the scheme of thingsI therefore make it bold to Nigerians to tender a heartfelt apology to Nnamdi Kanu. He has substantiated his spiritual efficacy as a PROPHET. A living Elijah, Moses and Joshua. These three personalities are fused in him. Against all odds, he stood very firm in the midst of raging storms and proclaimed the truth without minding whose ox is gored. Even when other prophets were cowed into oblivion, he fiercely stood so tall to question and dismantle the perennial lies that characterises the British fraud called Nigeria
Furthermore, a concerted effort should be made to compel Burutai and his rampaging army to provide Nnamdi Kanu wherever they might have taken him to. This is the time for those ‘one Nigerianists’ that betrayed the prophet ( Nnamdi Kanu ) when he was trying to wake them from their slumber to make up for their treachery. They must join other reasonable Nigerians to pile up pressure on the Nigerian government to provide Nnamdi Kanu. From the empirical standpoint, Nnamdi Kanu seems to be the potent antidote to the problems plaguing Nigeria.This is the time to act! Nigerian government must tell us what they have done with Nnamdi Kanu.Notwithstanding, one of the most prominent and enduring thing about the unadulterated gospel Nnamdi Kanu was preaching is that, it has liberated and emancipated millions of lives who thirst for the truth and freedom of the soul.More overwhelming to it is that, it has been able to change and reinforced political perspective and narrative within the geographical enclave of Nigeria and in Africa at large. His message has spurn a strong political precedents that has become a good benchmark for other political actors.However, as Nigerians do the needful by tendering a heartfelt apology to Nnamdi Kanu, I urge Biafrans all over the world to remain resolute. As our referendum is drawing near, all hands must be on deck as we ensure our complete emancipation from the shackles of these marauding savages.God bless Biafra!
Loading...
35