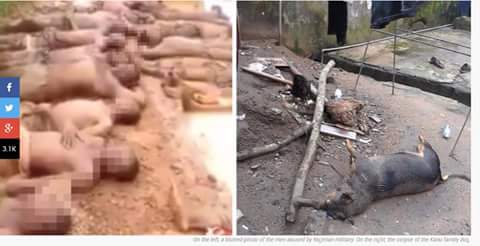 Community demands N500 million from FG to appease the gods
Six months after the military invaded the Afaraukwu home of the leader of the Indigenous People of Biafra, Nnamdi Kanu, the people of the community have been licking their wounds and waiting in anxiety for the return of their traditional ruler,  Eze Isaac Okwu Kanu and his wife, who were taken away, but have not come home since then.
As they are waiting, the people are also demanding from the Federal Government the sum of N500 million to enable them cleanse their community which they claimed the invading soldiers desecrated.
The Afaraukwu invasion
The Afaraukwu community, a key integral part of the boisterous Abia State capital also had a serene environment, no wonder it is home to the Abia State Government House, quarters of most senior military and police officers in the state; and most importantly, home to the famous Ojukwu Bunker.