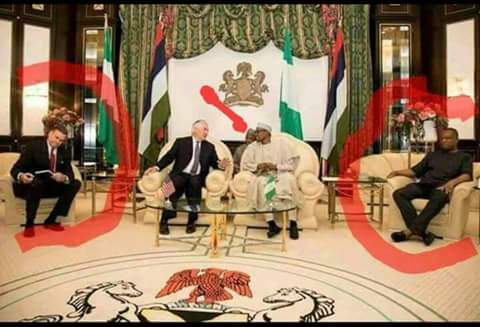 TILLERSON’S SACK, A GREAT LESSON TO NIGERIA ON BIAFRA ISSUES
The sack of Mr Rex Tillerson is an important lesson to Buhari and Nigerian government. Tillerson, who was sacked by the president of United States of America, after his visit to Buhari was the former CEO of ExxonMobil, and was appointed US secretary of state.
It should be recalled that Buhari, the president of Nigeria voted against Trump’s decision to move the United States’ embassy to Jerusalem. Buhari led government also is the same government that killed innocent and unarmed Indigenous People of Biafra on the inaugural day of Trump’s administration. Buhari abused the rights of the people of Biafra because they were requesting for the release of their leader, Mazi Nnamdi Kanu, and because trump did not say a thing they thought he was not aware of the atrocities that are being committed by the Nigerian government.

Mr Tillerson wanted to play fast by not including Nigeria on the list of countries he will visit but only announced the visit to Nigeria in Nairobi because he has a business of oil to discuss with Buhari. It would have been noted that recently United States stopped lifting oil from Nigeria, so Mr Tillerson’s intention in visiting Buhari was to strike oil deal with him and Mobil, but was not aware that Trump is smarter and Biafra’s intelligence was on ground to dictate the body language of Mr Tillerson.
The most significant of the sack of the US secretary of state was that it was done on Twitter. This is to send a serious signal to the Nigerian government that the issue of killings of innocent and unarmed indigenous people of Biafra on the inauguration day of Trump’s administration, which IPOB celebrated with commitment, is not yet over .This singular action of Mr. Trump, is to show the world that he is a man of his words and should be taken as such .Trump is worthy to be called a leader, he is not like the corrupt president of Nigeria who cannot sack a police chief who disobeyed his directive.

BREAKING: A trustworthy govt does not negotiate with terrorist – Fayose blasts Buhari