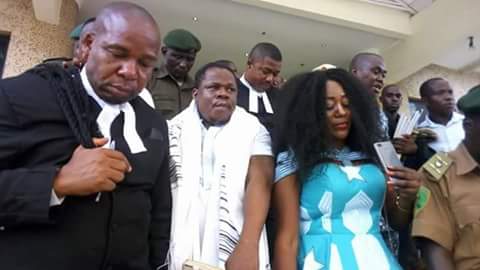 Early report gathered by IgbereTv reporters monitoring the court proceeding in Abuja alleges that Federal government have initiated a move to adjourn the court case through the presiding muslim woman judgeJustice Binta Nyako.
Recall that this particular cases have suffered adjournment since the trial begins.
The subsequent adjournment of this trials have continue to generate tension in the polity, some perceived it as witch hunt  to the people  of Biafra whose rights have been trampled upon.
A Biafran activist simply identify as Mark Sapp took to his facebook page to criticize the plot to adjourn today’s ruling .
Self determination is enshrined in the United Nations Charter of rights of indigenous people to self emancipation which is domesticated by Nigerian government as a member nation. Therefore, it is within our legitimate right to agitate for our freedom using the same law as provided by United Nations which Nigeria is signatory to.
I hereby call on people of good conscience and lovers of freedom, equity and justice and indeed all Biafrans around the world to stand up and resist this travesty of justice and the continued illegal detention of these our brothers for close to 3 years now.
Either they release our brothers tomorrow unconditionally or 10 million Biafrans will hit the street both in Biafraland and in diaspora to demand for their release. We have truly endured this injustice for long and enough is enough. We shall not allow this to continue unchallenged. I am calling on Biafrans worldwide to get ready because we must compel Nigerian government to free our brothers, Benjamin Madubugwu, David Nwawusi, Bright Chimezie Ishinwa and Chidiebere Onwudiwe. The incessant adjournment of this court case must be put to a stop tomorrow. he posted
By solomon – Tuesday, 20 March 2018 –

BIAFRA: TELL JOHN NNIA NWODO THAT IPOB HAS CROSSED THE POINT OF RETURN

BREAKING: A trustworthy govt does not negotiate with terrorist – Fayose blasts Buhari