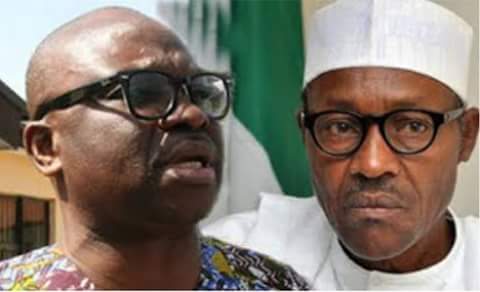 Governor Ayodele Fayose of Ekiti state has criticized a proposed strategy by President Muhammadu Buhari to release the abducted 110 Dapchi girls from Boko Haram insurgents.
President Buhari after meeting with Ex-US Secretary of State, Rex Tillerson said Nigeria prefers to have schoolgirls abducted by Boko Haram from Chibok and Dapchi back alive.
He said that was why it has chosen negotiation rather than military option.
Reacting, Fayose said terrorism cannot be defeated by negotiation.
According to him, responsible government does not negotiate with terrorists.

On his Twitter page, he wrote, “I have never heard of anywhere in the world where terrorism was defeated by negotiation.
“Responsible govt don’t negotiate with terrorists, it fights terrorism and crush it totally.
“May God put an end to these killings in our country.”