Home / News / Innocent Man Awarded $1 Million After Spending 31 Years In Prison The award was described as “bittersweet” by his attorney.

Innocent Man Awarded $1 Million After Spending 31 Years In Prison The award was described as “bittersweet” by his attorney. 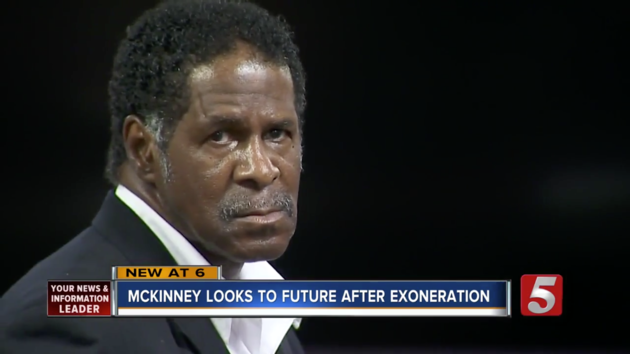 By Nina Golgowski
Tennessee awarded a man $1 million after he spent nearly 32 years in prison for a crime that DNA evidence cleared him of.
Lawrence McKinney, 61, was imprisoned in 1978 for rape and burglary before freed in 2009. The Tennessee Board of Claims granted him the compensation on Wednesday.
Nashville Attorney David Raybin, who has represented McKinney for the last six years, described the outcome as “bittersweet” for McKinney who was only formally exonerated from the crimes within the last three months.
“I’ve been a criminal defense attorney for 40 years, this is probably one of the most moving events I’ve ever experienced,” he told HuffPost on Thursday. “To have someone in prison that long and to fight for years, for six years to get him some justice, it has just been an enormous undertaking.”

WTVF
Lawrence McKinney, 61, was awarded $1 million on Wednesday for a 1978 conviction that was overturned in 2009.
The payment is divided into one $353,000 upfront payment, which is to cover attorneys fees, debts and the cost of a vehicle, followed by $3,350 monthly payments for a minimum of 10 years. If he should die before those 10 years, either his wife or his estate will be eligible to collect the following monthly payments, the Tennessean reported.
The $1 million compensation is the highest permitted by the state, as well as the highest it has ever granted due to the length of time McKinney served. That’s not to say that everyone is calling the amount sufficient.
“The board of claims at the hearing said that they thought it was an inadequate award,” Raybin said.
He pointed out that the $1 million maximum was set about 10 years ago and doesn’t consider adjustments for rising costs of living.

Still, if you ask McKinney, he might say that the closure of this chapter of his life is a blessing enough, Raybin said.
After being released from prison nine years ago, he endured a yearslong legal battle for both monetary compensation and exoneration.
The parole board twice refused to formally exonerate him, even though the Shelby County Criminal Court and district attorney general found that DNA evidence failed to link McKinney to the crime he was convicted of. Former Gov. Phil Bredesen (D) also declined to clear his name when given the chance, Rabin said.

It wasn’t until December 2017 that current Gov. Bill Haslam (R) completed the task for McKinney, an act that then made him eligible to seek compensation from the state.
“In the eyes of the judicial system, Mr. McKinney is innocent,” Haslam said in a statement at the time. “While I appreciate the hard work and recommendations of the Board of Parole, in this case, I defer to the finding of the court charged with determining Mr. McKinney’s guilt or innocence.”
Raybin shared McKinney’s gratitude to the board and the governor.
“He was obviously very moved by all of this,” Raybin said of McKinney’s reactions, saying he expected the exoneration would come sooner or later. “He has infinite patience, and he is also a very religious person and has extreme faith in God.”
As for that $1 million maximum, Raybin said some of the board members told him that they will revisit the cap next year.
“Many other states have much higher amounts,” he said.
According to the Innocence Project, a nonprofit legal organization that fights to exonerate those who have been found wrongly convicted through DNA evidence, 18 states do not have laws that would grant compensation to individuals incarcerated for a crime they did not commit
Those states are Alaska, Arizona, Arkansas, Delaware, Georgia, Idaho, Indiana, Kansas, Kentucky, Nevada, New Mexico, North Dakota, Oregon, Pennsylvania, Rhode Island, South Carolina, South Dakota, and Wyoming.
The Innocence Project stresses the need for adequate compensation to those who are wrongfully convicted. Recently released individuals often find themselves without family, friends, housing, transportation, insurance and retirement money.
In the case of those who are proven to have been wrongfully convicted through DNA, those individuals on average spend more than 14 years behind bars before their release, the organization’s website states.

Like Loading...
Related ItemsForeignNews
← Previous Story We are ready for war until we take over our land Nigeria, says Fulani on press release
Next Story → NIGERIA: Law allows Nigerians to defend themselves from attacks – Sagay