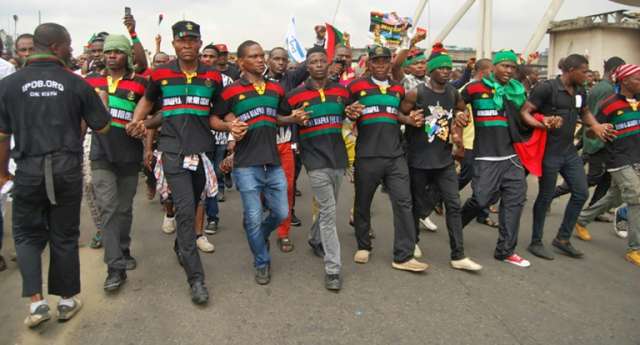 Biafra: Biafra Referendum And What Africa Stands To Benefit As AU Backs/Ensures A Peaceful Process
Biafra Referendum Is A Right Approach To The Freedom Of Biafrans And Afican Union Must Show Leadership And Precedence To Human Lives Across The Continent

The first set of questions that comes to mind whenever the talks on Biafra referendum is put in perspective among faithfuls and sympathizers is often the question of how bloody the exercise would be – the security of the process. People begin to imagine how the whole matter is going to go down in lieu of the several unchallenged highhandedness of the occupying forces of the joint military and paramilitary outfits. They continue: are we sure it is not another means of giving easy baitings to the blood-thirsty government of Muhammadu Buhari and his Fulani cabal? the people keep asking!
In all these questions and genuine fears and concerns among the Biafran population and individual foreign friends and sympathizers, I see a people stuck in a World of despots, liers, deceivers, blood-suckers, conspirators, unconcerned, hypocrites and irresponsible leadership, to mention but a few. Our World has gone blind! Human life no longer means a thing to humanity! Darkness has beclouded our original sense of reasoning and empathy! The evil of lust for material things has ravaged humanity so devastatingly!

United Nations has forgotten the rights of all indigenous people Worldwide as declared by the general assembly of heads of state and government and domesticated by African Union and all the members of the United Nations and African Union respectively. The statutory and legal strength of this article 20 declaration has been transacted for material benefits by all the organizations responsible for the enforcement of same!
If truly, the African Union is truly poised to protect the human rights of citizens of all member Nations from violation and desecration, as has turned a staring and barbarous tradition among vast majority of her members and Nigeria, the principal violators in this context, the African Union, through her statutory institutions such as her commission, must not only give an unchallenged support to Biafra ‘REFERENDUM’, but also saddle the commission with the responsibility of enforcing same, being a very peaceful approach to  modern standard for freedom.
Enough of the killings and unchecked maiming across Africa by sitting despots and tyrants in governments.
Colonial administration, which ravaged Africa in the past, and got her chunk of blames for various misadventures in the black continent called Africa is now, truly over. If Africans truly have the capacity to run their affairs and lead the turn of political Reformation that shall heal Africa from all foreign imposed and inorganic creations, the much campaigned Biafra referendum now presents itself as an outstanding test of strength of black civilization as against the rhetorics of ‘interruption of black civilization’ by the invading white colonial administration.

The World has truly and obviously gone mute! Waiting for African Union to intervene and show leadership, at least for once.
BENEFITS OF AU BACKED BIAFRA REFERENDUM
1)Africa as a continent shall be respected by the rest of the civilized World for once.
2)African leaders shall  be allowed to make decisions for the welbeing of the continent and citizens alike
3)There shall be renewed commitment to leadership across Africa
4) Indigenous populations across Africa that seek self-rule, shall never resort to Arms struggle, which has battered the image of the continent before the entire World, but go through an African Union backed Referendum, thereby avoiding bloodshed and attendant chaos.
5) There shall be a renewed commitment and belief in the leadership across Africa among the youths and the black citizens in general.
6) Africa as an emerging Continent shall be the choicest place for investors from all across the globe
7)Biafrans shall work with other Nations across Africa towards creating that truly technological continent that shall stand shoulder to shoulder with other nations/continents of advanced technology and in the comity of World Nations

8)  A great Africa shall breed renewed confidence and pride among all black people Worldwide, where human rights of her citizens shall fall within the exclusive priority of the black Nations and leadership.
9) The Era of potential and creative Africans trooping out across the World for greener pastures shall be truly over.
10) Africa shall create her dreams into realities.
11) There shall be renewed ‘HOPE’ across Africa, and Africa shall be a better place for all.
In the  words of Mike Murdoch, the great philosopher ” You will be remembered for two things, the problems you solved or the ones you created”.
The current flocks of leaders across Africa have the golden opportunity now to scribble their names in the annals of time. Supporting Biafra would be a solution to a plight, ignoring Biafra referendum would spell doom for the whole continent of Africa. A stitch in time also saves nine.

In the phylosophies of Martin Luther King jnr.” The ultimate measure of a man, is not where he stands in moments of comfort and convenience, but where he stands at times of challenge and controversy”-This should serve as a great lesson to the rest of Africans and the black people as a whole in this great moment of attention. Africa must rise from the crucibles, only if black life and freedom is given needed premium.
In conclusion, support Biafra referendum now for a greater, peaceful and more cohesive Africa.
Alex is a writer with conscience. Pan-Africanism is my school of thought!
Help save Biafra!
AUTHOR: Alex C. Okeke
FOR: IPOB Writers