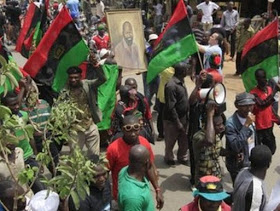 A former Minister of Foreign Affairs, Mathew Mbu, has made a new exposition into the Nigeria Civil War.
The former Minister said United States of America and other world powers were planning to change the history of the war by eventually backing Biafra.
Mbu said had the civil war lasted longer, America would have intervened and come on Biafra’s aide.
According to him, the World Powers had great sympathy for Biafra but preferred the option of exploring a more flexible federation for Nigeria.

He said this in an autobiography the he left behind to be published by his family.
The book entitled “Dignity in Service,” is due for public presentation on Tuesday next week at the Yar’Adua International Conference Centre, Abuja.
He wrote, “The regions should have a little bit of autonomy; that was the issue throughout those 30 terrible months of the civil war.
“The first Biafran cabinet meeting was held and articulated in Enugu by our head of government, Col. Ojukwu, and after subsequent meetings in Umuahia and Owerri, he summoned leaders of thought and took a resolution.

“The United States and other major powers had great sympathy for Biafra.
“One fear that haunted other African nations was that if Biafra breaks they would also break up.
“Their enormous sympathy for Biafra notwithstanding, they preferred the option of exploring a more flexible federation for Nigeria.
“Had the war lasted longer, there would have been a major intervention that would have changed the history of the civil war by the major powers. It was good it ended when it did.
“The suffering as being portrayed outside, the suffering of children on humanitarian ground was too compelling to ignore.”

Facebook Comments
Loading...
Related ItemsBiafraNews
← Previous Story We Have No Business With Your State Development – Osibanjo Tells Nigerians
Next Story → Kalu To Fayose: You’re My Boy, You Can’t Stop Me From Campaigning For Buhari In Ekiti