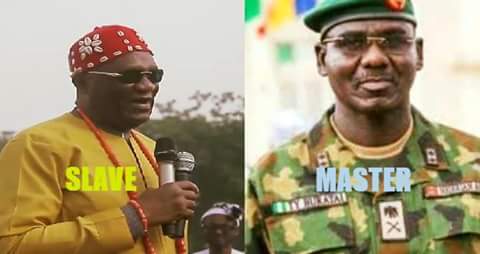 diers Involved – Nnia Nwodo
The Ohanaeze Ndigbo, the apex socio-cultural body of the Igbo, has called for the prosecution of soldiers involved in an alleged extra-judicial killing of members of the Indigenous People of Biafra during the recent Operation Python Dance in the South-East.
The President General of Ohanaeze, Chief Nnia Nwodo, said the organisation had raised the issue with the leadership of the Nigerian Army.

Speaking during a ‘Night of Tributes’ for the late Biafran war commander and former Secretary General of Ohanaeze, Col. Joe Achuzia, at Enugu Sports Club, Nwodo said soldiers who flouted the army’s rules of engagement during the military exercise should face a court-martial.
Nwodo said he was given an “assurance” by the military authorities that the concerned soldiers would be tried.
He said, “I was given an assurance by the leadership of the army that the officers involved in the extra-judicial killings (during Operation Python Dance) will face a court-martial.
“I have been following up on that and I will continue until those who destroyed our children are made to pay.”
Extolling Achuzia’s efforts during the war, Nwodo noted that the Igbo in Delta State, Achuzia’s home state, made more painful sacrifices during the war than people from other Biafran areas.

He made reference to the ‘Asaba Massacre’, when hundreds of male adults and youths in Asaba town were rounded up and killed by Nigerian soldiers.
Expressing regrets that not much has been done to acknowledge the sacrifices made by the Igbo in Delta State, Nwodo noted that Achuzia’s death had provided an opportunity to appreciate the price paid by his kinsmen.
A former President General of Ohanaeze, Chief Gary Enwo-Igariwey, and a former military administrator of Imo State, Navy Captain James Aneke (retd), noted that Achuzia’s expertise in military combat earned him the nicknames ‘Hannibal’ and ‘Air Raid.’
Meanwhile, the Ohanaeze Youth Council pushed ahead with the ‘war’ it declared against Nwodo on Tuesday by issuing a statement entitled ‘New President General of Ohanaeze to emerge soon.’

The statement jointly signed by the OYC President, Mazi Okechukwu Isiguzoro; Secretary General, Mazi Okwu Nnabuike; and Vice-President, Achuonye Obinna, said, “There will likely be a change of guards in the leadership of Ohanaeze Ndigbo and an election of a national Acting Steering Committee of Ohanaeze Ndigbo.”
The group further claimed that it had the support of “some respectable Igbo elders, leaders of thought, captains of industry and the intelligentsia.”
Ihuoma Chiedozie, Enugu

Facebook Comments
Loading...
Related Items
← Previous Story Don't Use Arms, Just Defend yourselves with stones – Gov Ortom
Next Story → It Wasn't My Intention, I was deceived to join delegation, says one of the pastors who visited Buhari in Aso Rock