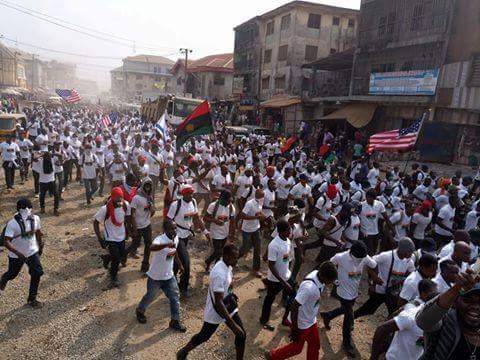 PRESS RELEASE
FROM: Indigenous Peoples of Biafra (IPOB)
DATELINE: London UK, 12th April, 2018
RE: JUSTICE BINTA MURTALA-NYAKO SHOULD DO JUSTICE TO IPOB THE SAME WAY SHE DID TO BOKO HARAM SUSPECTS
The Indigenous Peoples of Biafra (IPOB) hereby wish to acknowledge Justice Binta Murtala-Nyako for the uncommon courage she demonstrated days ago in dismissing terrorism charges against two Boko Haram suspects on grounds of lack of diligent prosecution by the office of the Attorney General of the Federation. We consider this a landmark decision that not only binds her court in all similar cases but should also serve as an example to other courts before whom such prosecutorial misconduct continues unabated, especially with regards to IPOB members (Benjamin Madubugwu, David Nwawusi, Bright Chimezie Ishinwa & Chidiebere Onwudiwe) languishing in detention since 2015 without trial.
More particularly, we expect the Honorable Justice before whom Charges have been pending against four of the above IPOB members, including our leader Mazi Nnamdi Kanu, to do justice and likewise dismiss said Charges for the following reasons:
1. With regard to our leader Mazi Nnamdi Kanu, it is undisputed that he has been ready for trial since he was arrested and charged in 2015 but the prosecution has proved unready and resorted to the dilatory tactics of filing several applications for amendment of the Charges which were all granted by Justice Nyako. And just when it was becoming clear that trial must ensue and no further prosecutorial delay will be entertained, the Complainant (Federal Government) resorted to the use of lethal military force to extra-judicially murder Nnamdi Kanu in order to permanently deny him his day in court to prove his innocence.
2. As regards the other IPOB patriots charged together with Mazi Nnamdi Kanu, the story is the same and even worse as they have been denied bail and locked up in prison since 2015 while the prosecution continues to demonstrate an abject lack of diligent prosecution through incessant applications for amendment of Charges, with the last one being in March, 2018. Bright Chimezie Ishinwa was discharged and acquitted by a Federal High Court in Uyo and awarded 5 Million Naira damages. DSS refused to release him, he is still in detention.

3. When trial finally commenced last month against the other four defendants charged together with Mazi Nnamdi Kanu, it emerged from the direct and cross examination of the only witness presented by the prosecution that the defendants actually have no case to answer, especially with respect to the allegations of treasonable felony and the so-called concealment of an imported transmitter. Instead of continuing with the trial the prosecution asked for two months adjournment. Why they requested such lengthy adjournment defies logic since they claim they have their witnesses ready. It is very clear the AGF has no credible witness to present hence the culture of adjournment after adjournment to prolong the illegal detention of these Biafrans. If they were Fulani by ethnicity, they would have been released by now.
4. The world have observed from the proof of evidence and list of witnesses disclosed to the court that the prosecution lacks any evidence and witnesses to even make out a prima facie case against Mazi Nnamdi Kanu and the other accused IPOB patriots. Even Justice Binta Nyako ruled the same when she considered the evidence or lack of before the court. Moreover secession is not a crime known to Nigerian legal system so why is a learned judge like Binta Nyako entertaining a baseless charge not founded upon any law?
5. Based on the bold decision rendered by Justice Nyako in the said Boko Haram cases, we expect that the honorable Justice will apply her decision across the board and without any discrimination whatsoever by also dismissing the charges pending before her court against our leader, Mazi Nnamdi Kanu, Benjamin Madubugwu, Bright Chimezie, David Nwawusi and Chidiebere Onwudiwe.
6. If Justice Nyako feels strongly that the Federal Government has unresolved issues with IPOB, she has the authority to invoke her powers to recommend a ‘political solution’ under Section 17 (Reconciliation in civil and criminal cases) of the Federal High Court Act, which provides that “In any proceedings in the Court, the Court may promote reconciliation among the parties thereto and encourage and facilitate the amicable settlement thereof”. We firmly believe that this may have informed the decision of the court to grant such lengthy adjournment in the first place. Justice Binta Nyako should not entertain any further requests for adjournment of this matter or calculated non appearance by the prosecution team as a way of delaying justice from being served in this matter. Since it has been clearly demonstrated that the government is not willing to proceed with the case and lack the witnesses to testify for them, the only sensible left for Justice Binta Nyako is to dismiss the charges and free the detainees until the government is ready to prosecute the case.
7. Finally, we wish to remind Justice Nyako that while members of Boko Haram have taken lives of thousands of Nigerians and still doing so, no member of IPOB has taken the life of a single Nigerian or committed any act of violence whatsoever. There is no moral or legal justification for the definite detention of IPOB activists in Nigerian prisons.

We believe that what is good for Fulani Boko Haram suspects is also good for Igbo Biafra activists that never bombed or killed anybody unlike Boko Haram and Fulani herdsmen.
Signed:
Mazi Chika Edoziem
Head of Directorate of State (HDoS)
Indigenous People of Biafra
World Headquarters
Langenfeld Germany