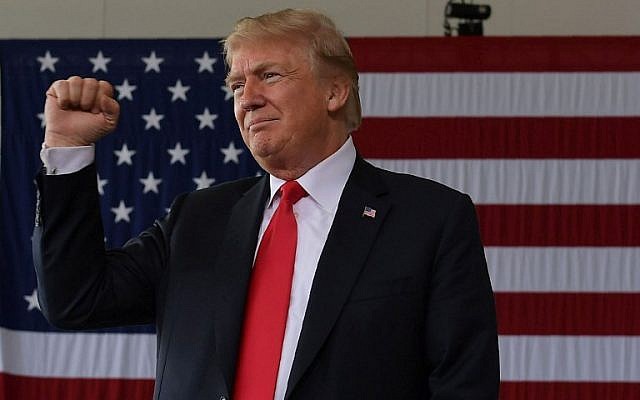 US President Donald Trump on Wednesday warned Russia that “nice and new” missiles would be heading to Syria and Moscow should “get ready.”
In a tweet, Trump also said Russia shouldn’t be allied with a “Gas Killing Animal,” a reference to Syrian President Bashar Assad whose regime is accused of killing dozens of people in an alleged chemical weapons attack on rebel-held Douma over the weekend.
Russian lawmakers have warned the United States that Moscow would view an airstrike on Syria as a war crime, saying it could trigger a direct military clash between the two former Cold War adversaries.

“Russia vows to shoot down any and all missiles fired at Syria,” Trump tweeted. “Get ready Russia, because they will be coming, nice and new and ‘smart!’ You shouldn’t be partners with a Gas Killing Animal who kills his people and enjoys it!”
Trump has threatened military action in response to Syria’s suspected chemical attack, which activists and rescuers say killed at least 40 people. The Syrian government and its ally Russia have denied that such an attack ever happened.
Illustrative photo of a US Air Force F-15E Strike Eagle flying over northern Iraq on September 23, 2014, after conducting airstrikes in Syria. (AFP/US Air Force/Senior Airman Matthew Bruch)
Forty minutes after his first post, the US president tweeted: “Our relationship with Russia is worse now than it has ever been, and that includes the Cold War. There is no reason for this. Russia needs us to help with their economy, something that would be very easy to do, and we need all nations to work together. Stop the arms race?”

In April 2017, Trump launched a cruise missile strike against a Syrian airbase in retaliation for a sarin attack the UN later pinned on Assad.
Responding to Trump’s tweets, Moscow on Wednesday said the US should strike “terrorists, rather than the legitimate government” in Syria.
“Smart rockets should be aimed at terrorists, rather than the legitimate government, which has for several years been fighting international terrorism on its territory,” foreign ministry spokeswoman Maria Zakharova said in a Facebook post.

Asked about Moscow’s reaction to a possible US strike on Syria earlier, Kremlin spokesman Dmitry Peskov said Russia still hoped that all parties in the conflict would refrain from taking “steps that could gravely destabilize the fragile situation in the region.”
State news agency RIA Novosti on Wednesday quoted Andrei Krasov, deputy chairman of the State Duma’s defense committee, as saying that Russia will treat a US airstrike on Syria “not just as an act of aggression but a war crime of the Western coalition.”
Vladimir Shamanov, a retired general who heads the defense affairs committee in the lower house of parliament, said in televised remarks Tuesday that a US strike in Syria could hurt Russian servicemen and trigger retaliation. He said that Russia has “the necessary means for that, and the Americans and their allies know that quite well.”
Shamanov emphasized that a retaliatory Russian strike could target US navy ships and aircraft. He added that the use of nuclear weapons is “unlikely.”

Russian Ambassador in Lebanon Alexander Zasypkin in Beirut, Lebanon, May 16, 2016. (Hassan Ammar/AP)
Russian Ambassador to Lebanon Alexander Zasypkin, meanwhile, told Hezbollah’s Al-Manar TV station that any missiles fired at Syria would be shot down. He said he was referring to a statement by Russian President Vladimir Putin and the Russian armed forces chief of staff.
“If there is a strike by the Americans, then… the missiles will be downed and the source of the missiles targeted,” Zasypkin said.
Meanwhile, European airspace authorities warned aircraft to be careful over the coming days when flying close to Syria because of possible military action against Assad’s forces.

The Eurocontrol airspace organization said that the European Aviation Safety Agency had sent a “Rapid Alert Notification” that flight operators needed to consider the possibility of air or missile strikes into Syria.
US officials have consulted with global allies on possible joint military response to Syria’s alleged poison gas attack.
In a notice posted to Eurocontrol’s website, EASA said: “Due to the possible launch of air strikes into Syria with air-to-ground and/or cruise missiles within the next 72 hours, and the possibility of intermittent disruption of radio navigation equipment, due consideration needs to be taken.”
Times of Israel staff contributed to this report.

It Wasn't My Intention, I was deceived to join delegation, says one of the pastors who visited Buhari in Aso Rock