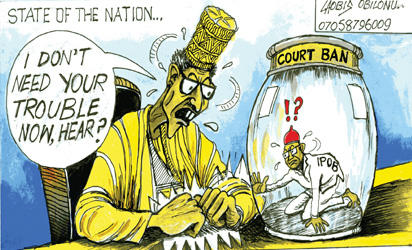 The Federal High Court, Abuja on Friday fixed May 21 to rule on the bail application filed by Bright Chimezie, the first defendant, in the ongoing trial of four members of the Indigenous People of Biafra, (IPOB).
The trial judge, Justice Binta Nyako, fixed the date after taking arguments from Chimezie’s counsel, Mr Chukwudi Igwe and counsel to the Federal Government, Mr Collins Aromosele.
Igwe asked the court to grant his client bail on the grounds that he had overstayed in detention without trial, adding that his client had already been granted bail by an Uyo Federal High which the Federal Government disregarded.

He maintained that his client was eager to see how the prosecution would prove their case against him and to this effect, granting him bail would not jeopardise the trial in anyway.
He said that his client would not temper with the case and would attend court to defend the charge against him.
Aromosele opposed the bail application, and urged the court to dismiss it.
Counsel to the second to fourth defendants, Chidiebere Onwudiwe, Benjamin Madubugwu and David Nwawuisi, also argued the bail applications on behalf of their clients.
Mr Eric Ifere, counsel to Onwudiwe prayed the court to grant his client bail on the grounds that the constitution provided that accused should be granted bail if trial did not commence within two months.
“The defendant has been in detention for close to two years and except where Section 162 is applicable, which passes the onus to the prosecution to prove that if granted bail, the defendant will temper with justice.
“They are also to prove that the defendant will jump bail and not attend court and they can only prove this with evidence placed before the court.”
Mr P. Ejiofor, counsel to Madubugwu, on his part, prayed the court to grant his client bail on health grounds.
He further prayed the court to grant his client bail on the grounds that he had stayed long in detention, adding that there was no objection to the application for bail.
“One of the reasons we want the court to consider is the health of the defendant whose medical records are before the court and medical experts have recommended that he needs further medical care beyond the walls of the prison.
“Also, the time he has spent in detention is almost equal to the amount of time stipulated as punishment for one convicted of the crime he is charged for.”
The prosecuting counsel, however, asked the court for time to enable him respond to the bail application of the second to fourth defendants.
The defence team had also hinted the court that they had an application challenging the competence of the charges against the defendants.

Justice Nyako adjourned the matter until May 21 to rule on the bail application of Chimezie and to allow the prosecution respond to applications of the second to fourth defendants.
The Federal Government on March 20, re-arraigned Chimezie, Onwudiwe, Madubugwu and Nwawuisi, on an amended three-count charge.
Their re-arraignment was sequel to the severance of their trial from that of Nnamdi Kanu, whose whereabouts had been unknown since September, 2017.
They are standing trial for charges bordering on conspiracy to commit treasonable felony, improper importation of goods and illegal possession of firearms.
(NAN)