Home / News / Buhari's end will be worse than King Pharaoh's in 2019, says Fani-Kayode

Buhari's end will be worse than King Pharaoh's in 2019, says Fani-Kayode 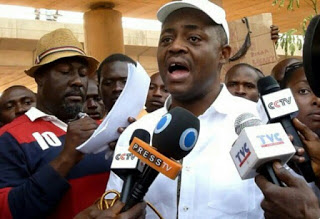 Femi Fani-Kayode, former Aviation Minister, on Tuesday declared that “only God” will stop President Muhammadu Buhari from ruling Nigeria for a second term.
The Peoples Democratic Party, PDP, chieftain said Buhari will fail during the 2019 presidential election and God alone will take the glory.
Referring to the case of Biblical King Nebuchadnezzar, Fani-Kayode stressed that Buhari will “bow before the living God.”
In a tweet, the PDP chieftain warned that Buhari’s end will be worst than Biblical Pharaoh.

He wrote: “The bad news is that only God can stop Buhari from coming back next year.The good news is that He most surely will and He alone will take the glory.
“By the time it is all over, like King Nebuchadnezzar, Buhari will bow before the Living God. His end will be worse than Pharaoh’s.”
Recall that Buhari had on Monday announced his intention to seek re-election in the 2019 presidential election.