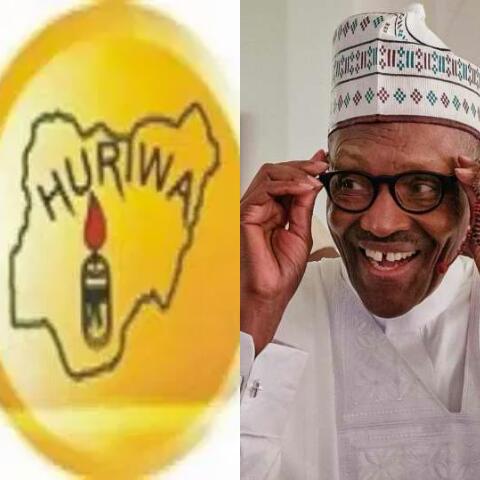 The Human Rights Writers Association of Nigeria, HURIWA, has attacked President over his comment on the rampaging Fulani herdsmen.
Recall that President Muhammadu Buhari, who is currently on vacation in London, had during a meeting with the Archbishop of Canterbury, blamed erstwhile Libyan President, Col. Muamar Gaddafi, for the attacks in various parts of Nigeria.
But Reacting to the president’s comment, HURIWA, through its leader, Emmanuel Onwubiko, said Buhari showed no sympathy to thousands of Nigerians being murdered in their farms and homes, adding that he (Buhari) and the entire presidency, have tried to confuse Nigerians with different narratives as regard the real cause of the continued attacks.
In a statement forwarded to DAILY POST on Friday, Onwubiko said, “I watched in considerable trepidation and anxiety as my President who is vacationing in London, in the United Kingdom held a conversation with the Archbishop of Canterbury around the issues of the pre-meditated mass murders by armed Fulani herdsmen targeting rural Christian farmers.

“He showed no remorse or sympathy with the thousands of the victims cut down in their prime but was smoking with some hot air around some make-belief and hearsay proposition.
“My trepidation and anxiety later turned into astonishment and disappointment when against every sheds of empirical evidence to the contrary, my president and commander-in-chief of Nigeria Armed Forces blamed a dead man, the erstwhile Libyan leader colonel Muamar Gaddafi for the upsurge in targeted genocides by armed Fulani herdsmen all around Nigeria. See how long Gaddafi had been slaughtered by Libyan rebels trained and armed by Europe and America.
“The claim made by president Buhari is a sharp departure from some of the things he and his affiliates in the presidency have always told Nigerians on the remote and immediate causes of the armed insurrection against land owners and farmers by armed Fulani herdsmen. It contradicts his illegal initiative to colonise peoples’ landed for the purposes of using public fund to set up cattle colonies. Was he planning to set up cattle colonies to resettle the so called Libya trained mass murderers or what?
“For instance, in the wake of the mass killings by armed Fulani herdsmen in Benue State of over 100 farmers who were given state public burial by Benue State government, president Buhari told the visiting community and political leaders from Benue who had thronged the Aso Rock Presidential Villa in Abuja that ‘they should learn to accommodate their neighbours.’ Who are these neighbours if we go by the most recent hypothesis of Buhari who introduced the illogical Gaddafi narrative?
“The Inspector General of police Ibrahim Idriss Kpodum who clearly has demonstrated high level of incompetence and incapacity to tackle the rising rate of vicious attacks by hoodlums targeting civilians, had blamed what he called ‘Communal Conflicts’ for the killings in Benue State. Who are these communities fighting if we go by Buhari’s tale by moonlight on the Libyan nexus?
”Another narrative was however introduced by the Minister of Defence, a retired Major General from Zamfara state when he shifted the blame for the phenomenal bloody violence in Benue, Taraba, Adamawa, Southern Kaduna, Plateau, Nasarawa and Kogi states to what he termed‘ the blocking of cattle grazing routes by some states.’ Who are grazing these cattle that found out that their traditional grazing routes are blocked if we go by Buhari’s sensational claim on the Libyan connection?
”Buhari himself has prevaricated and has engaged in a multiplicity of narratives around the disturbing issues of armed Fulani attacks. His only consistency in the entire scenarios is his inconsistency.

”Each time he is addressing foreign audiences in the West, he has attempted to market the Gaddafi’s narrative as the cause of the heightened state of insecurity in Nigeria. But at home, he oscillates between blaming foreign mercenaries to the illogicality of the blockade of grazing routes.
”For one arm of the intelligence gathering agencies – Department of state services (DSS) also headed by Buhari’s Fulani kinsman, the main perpetrators of the killings are not Fulani herdsmen original to Nigeria but foreign fighters and terrorists affiliated to the Islamic state of Syria and Iraq (ISIS) that is already defeated by the coalition forces headed by the United States.
”It would therefore seem that Nigeria under the current political leadership with a preponderance of Fulani/Hausa born heads of all the internal security agencies, does not have a harmonized theory about who is behind the ongoing attacks targeting largely Christian farmers in the North central and Southern Kaduna axis.”

BBOG: Nigerians must demand their rights from Buhari-Tunde Bakare

"I No Longer Trust Nigerian Press, They Should Urgently Change From Evil And Propagation Of Fake News" – Wike Explodes