Director General, National Taskforce to
combat illegal importation, smuggling of
goods, small arms, ammunition and
light-weapons, Dr. Osita Emmanuel
Okereke, has called on Nigerian
communities to be on alert, claiming that
members of terror group Boko Haram
have infiltrated herdsmen to cause havoc
across the country.
Okereke also accused security agencies of
complicity in the fight against the Islamist
insurgency, alleging that most of them
are members of Boko Haram.
Okereke, president of Importers
Association of Nigeria, backed the
assertion of the former Defence Minister,
Gen. Theophilus Danjuma, on the
complicity of the military, lamenting
sabotage from people powerful
individuals, whom he said are
encouraging the insurgency to continue.
“I want to tell you that there is a lot of
sabotage; most of the military men are
Boko Haram members and most of
Nigeria’s security men are members of
Boko Haram. Most security agencies are
Boko Haram,” he claimed.
“I can categorically tell you that
members of this administration are
fighting this administration, the people
earning from the government are part of
the insecurity in Nigeria; security
agencies are part of the insecurity in
Nigeria today.
“We need total overhauling, as Gen.
Danjuma said. He may know certain
things you might not know. I can tell you
there is an atom of truth in what he said
and I believe in what he said,” the
taskforce coordinator said.
Okereke, backed the withdrawal of 1$
billion to fight insurgency, though advising
that President Buhari should approach the
National Assembly for approval, warning
against politicizing the matter.
He said that Nigeria was a time bomb
that is waiting to explode if what is
happening in the Middle Belt states of
Benue, Plateau, Nasarawa, and Taraba
States is not checked immediately.
“So Boko Haram is like in every family in
Nigeria and people might not know
because any place they come they will
mix up with Hausa people who are selling
cows and inside the mosque, but people
will not identify who they are because
when you dress like a Hausa man nobody
will suspect you,” he said.
“This is what Nigeria must fight. Let us
stop deceiving ourselves talking about
herdsmen. Herdsmen are not the key
problem of Nigeria today. The problem of
Nigeria today is Boko Haram.
“As I am talking to you, there are arms in
every community in Nigeria. We have
made our research, and we have
information”, he alleges. 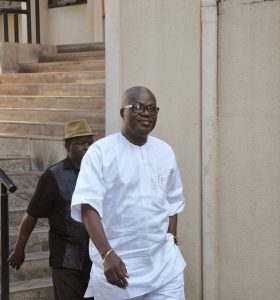 BIAFRA: IPOB SENT A CONGRATULATORY MESSAGE TO THE NEWLY ELECTED PRESIDENT OF THE REPUBLIC OF SIERRA LEONE

SHOCKING: How two male children of the same mother died inside a deep freezer