Brazil star Neymar said he is “recovering well”
from a foot injury and is on schedule to be
ready for the World Cup.
Neymar
The Paris Saint-Germain striker had surgery in
March on a cracked fifth metatarsal in his right
foot.
Neymar told a TV Globo variety show that he
feels no pain, but he cannot put his injured foot
on the ground without an orthopedic shoe. He
arrived on stage using two walking sticks.
“There is still a month left, but I am recovering
well. It is all according to plan,” the Brazilian
said. “I feel no pain; I am stepping little by
little. I cannot walk freely without the shoe, but
I am in treatment, I am working out at the gym
too. I am preparing well.”
The striker is widely expected to be on Brazil’s
final squad list that will be announced on May
14 in Rio de Janeiro by coach Tite.
He revealed that there were tensions between
him and fellow forward Edinson Cavani at the
start of the season.
Famously, the two publicly rowed on the pitch
over who should be allowed to take penaties.
Following the dispute, there have been months
of speculation that Neymar is ready to return
to Spain with a transfer to Real Madrid.
“It was made to sound bigger than it really
was.
“Of course there was a certain tension, friction
with Cavani, but we resolved it quickly.
“Three days after it happened, we all sat down
and we talked. We’re two great players, but
we’re also people and we had to resolve the
personal side of things.” 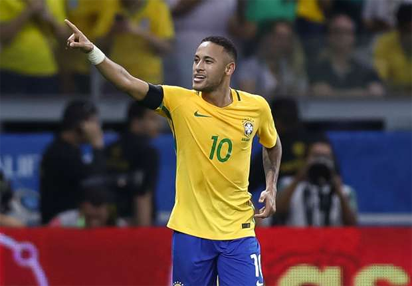 Amid a push by Tehran on online platforms,Iran bans social media.