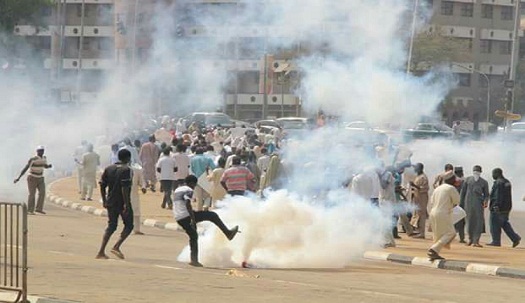 A human rights organization, Amnesty International, has condemned the reaction of the Nigerian police to the Shiites protests on Monday and Tuesday in Abuja.
In a statement signed by Osai Ojigho, Director Amnesty International Nigeria, the organisation said the crackdown on unarmed protesters put lives at risk.
The protesters took to the Unity Fountain, beside Transcorp Hotel, to demand the release of the leader of Islamic Movement of Nigeria, Ibrahim El-Zakzaky, who has been detained without trial for over two years.
They confirmed they held Tuesday’s protest at the Wuse Ultra-Modern Market in Abuja, adding that 30 of their members were missing after Monday’s protest.

The Shiites spokesperson, Ibrahim Musa, told PREMIUM TIMES that one of the protesters was killed, over 30 injured and about 200 arrested by the police.
The Nigerian government has kept the Shiite leader in custody since 2015 when his group had an encounter with a convoy of the Chief of Army Staff Tukur Buratai, leading to the massacre of about 300 Shiite members, including Mr El-Zakzaky’s sons. The cleric’s wife has also been detained since then.
Several security officers from the army, police as well as civil defence on Monday dispersed the protesters as eyewitnesses said the officers fired teargas and gun shots into the air.
Videos and footage have also been released by eyewitnesses showing the dispersal of the protesters and some of them throwing stones at police vehicles.
The FCT police command however stated no life was lost during the Shiites protest earlier today.
The police earlier said some government and police operational vehicles were destroyed by the protesters and “members of the Shiite group also injured 22 police personnel during the protest.”

But in its statement on Tuesday, Amnesty International said the strong hand applied against the protesters was unnecessary.
“This was a needless resort to violence by Nigerian police against a group of unarmed protestors. The IMN members gathered in Abuja were perfectly within their rights in demanding the release of their leader from a detention described by a federal court as both unlawful and unconstitutional.
“Although there were reports that stones were thrown by some protestors, there is no excuse for the use of live bullets, water cannon and tear gas. These were highly reckless tactics that could easily have resulted in fatalities. Nigerian authorities must adhere to the rule of law and respect the right to peaceful protest when policing these events.”
It described the arrest of 115 protesters as a worrying sign that the repression of IMN members is set to continue.
The group called on the Nigerian authorities to release IMN leader, Ibraheem El Zakzaky, and his wife, adding that the government “must also investigate the killings on 12-14 December 2015 in Zaria in which more than 360 people were killed by the military.”