Former African champions, Enyimba
International has advanced to the CAF
Confederation Cup group stages despite
failing to beat South African side,
Bidvest Wits in the second leg of their
play-off tie.
Enyimba headed into the clash with a
slight advantage after registering a 1-1
draw in the first leg in South Africa.
The encounter ended goalless although
Enyimba advanced to the group stages on
the away goals rule.
However, Mountain of Fire and Ministries
Football Club and Akwa United were sent
packing from the continental
championship after failing to scale the
playoffs hurdle.
In Mali, MFM FC could only manage a
goalless draw at Djoliba AC. They thus
crashed out of the competition on a 1-0
aggregate after they lost 1-0 at home to
the experienced campaigners from
Bamako.
Similarly, Akwa United failed to complete
a remarkable comeback against Al Hilal of
Sudan after they could only win 3-1 in
Uyo.
Al Hilal won the first leg in Sudan 2-0 and
took the lead in the second leg, before
Akwa United fought back to score three
goals.
Both teams have joined Nigeria’s league
champions, Plateau United who suffered a
4-0 bashing in Algeria against USM
Algiers on Tuesday. 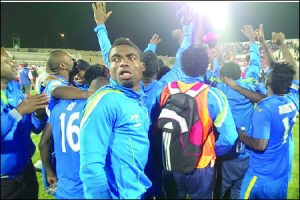