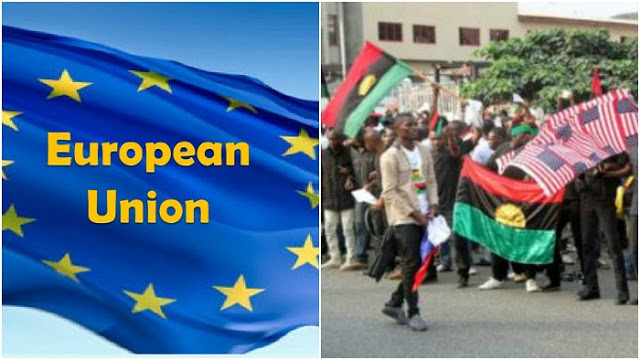 BREAKING NEWS
EU Parliamentary questions regarding IPOB Referendum.
The European Union, EU Parliament has raised question to its Nigerian Commission regarding  the Indigenous People of Biafra, IPOB’s call for a referendum.
Following a legal notice on its official website, the Parliamentary bodies demanded an answer from its Nigerian Commission Vice President/High Representative to explain the progress of the attention given to IPOB on their call for a referendum in Nigeria.
This was put forth on 3 April 2018 with reference number E-001978-18.
The body expressed fear that Nigerian government has consistently ignored court instructions and seeks for response to ensure Nigerian government respects court verdicts.
The question was directly raised by Julie Ward (S&D), citing rule 130.
“Subject: VP/HR — Indigenous People of Biafra.

“In Nigeria, the Indigenous People of Biafra (IPOB) have been calling for a referendum on the issue of the independence of Biafra for several years. Human rights organisations have denounced the Nigerian state’s violent response to this political movement.
“On 8 March 2018, the Chairperson of the African Commission on Human and People’s Rights addressed the Federal Republic of Nigeria, asking it ‘not to take any further action so as to avoid irreparable damage to IPOB and its Members, pending the decision of the Commission on this communication’.
“1. What action will the EU take to ensure that the Nigerian Government respects this request?
“2. Is the EU Delegation in Abuja in contact with IPOB, and is it providing them with appropriate assistance in terms of safety and the upholding of human rights?”