Oluwa Is Angry With Your Way Of Governance – Oyedepo Tells Buhari 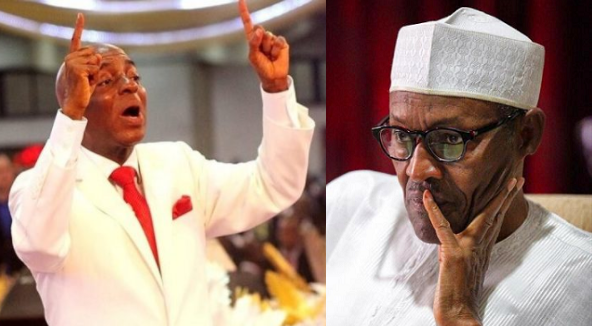 The founder and General Overseer of the Living Faith Church, Bishop David Oyedepo, has berated the President of Nigeria, President Buhariover the incessant killings of innocent Nigerians across the country.
Oyedepo who made the statement during the church service earlier today mentioned that he was not happy at the Nigerian government for their careless attitudes towards the lives of its citizens.
He also attacked the government following the epileptic power supply, dead refineries and high rate of dollar to naira.
He said:

“Can I tell you my anger against this government? No feeling for human lives. You can’t be destroying the work of my father and I will be happy with you. You know what God said? I am angry with the wicked everyday.
“Talk is cheap! You see where change brought us today since 2015? The changest change!
“1 naira will be one dollar. Fuel will be sold at 45 naira. Any responsible government will bring power in 3 months.
“If you bring the scoresheet out, it’s 0%. Do you want change? Work it out ! You better wake up so you don’t suffer the Nigerian kind of change.
Theoretical change.
“3 refineries working! (They must be) located in space. Defend ing killers! God’s judgement will hit!If you are happy with what God is angry with, you are ungodly.
“Those who have made others childless, wifeless, husbandless, so shall they become! Do you pray for Armed Robbers? Evil shall not prevail in Nigeria!”
Bishop David Oyedepo who had stated earlier in the year that he was contacted by members of the Fulani Herdsmen. According to him, the dreaded sect had warned Nigerians to be careful in their dealing with them.

In a letter that was sent to the Bishop, the group had said God has given them the land, Nigeria and that there will be no peace unless cattle colonies are established.
The Bishop said,
”Just last night, I got this, believed to be from the Fulani Nationality Movement, saying that God has given them this land and that they have the right to live anywhere, and until the colony is established, there will be no rest in Nigeria.
”I heard them say that the cattle colony is the only solution to the crisis, whether the Government or State Government accept or not.
”We have asked all Fulani herdsmen all over West Africa to move to Nigeria and penetrate every corner for the upcoming Jihad.”

Like Loading...
Related ItemsNews
← Previous Story Settle Biafrans Now Before It's Too Late – US Govt Instruct Nigeria Entity
Next Story → What bothers me is how to realise Biafra — Ikedife