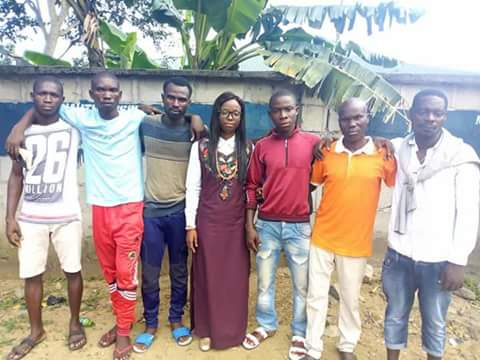 The Indigenous People Of Biafra have yet again, recorded victory, as The Legal Team secures unconditional release, for Six Biafran activists, who were arrested during the  IPOB rally in solidarity with Donald Trump on 20th January 2017, held in Rivers State.
The Biafran activists were arrested on the 20th Of January and  charged for;
Treasonable Felony
Belonging to an unlawful society
IPOB Legal Team filed for their Bail Application in State High Court, but the failed judiciary system and repeated lengthy adjournments, led to the delay and freedom of the accused.
The Charges were countered, upon which the Six activists were released unconditionally.

The released activists grossly appreciated, the immense efforts of The Indigenous People Of Biafra, led by Citizen Nnamdi Kanu, for not just securing their release, but according abutment to their wellbeing, while on detention.
The Family members of the victims were also not left out in the celebration of victory, as they reunite with the activists.
Ibeh Gift Amarachi reporting For Family Writers