– The Gunners were held to a 1-1 draw by
Atletico Madrid in the first leg of their
Europa League semi final clash
– Lacazette scored for Arsenal in the 61st
minute, while Griezmann equaliser came in
the 82nd minute
– Both teams file out for the second leg of
the meeting next week in Spain
Arsenal were held to a 1-1 draw by
visiting Atletico Madrid in the first leg
of their Europa League semi final clash
at the Emirates Stadium on Thursday
night.
Alexandre Lacazette opened scoring for
the Gunners in the 61st minute after
benefiting from Jack Wilshere’s superb
cross from the left wing of Atletico’s
defense.
But eight minutes to the end of the
match, France international, Antoine
Griezmann salvaged a point for the
Spanish League side after both teams
had endured a goalless first half in the
meeting.
UEFA Europa League
@EuropaLeague
Which tactician comes out on top here?
#UEL
7:02 PM – Apr 26, 2018
431 106 people are talking about this
Griezmann took advantage of poor
defending from Koscielny and Mustafi
to punish the Gunners few minutes
before the final whistle was sounded.
The Premier League side got the game
started in their traditional red jersey
and white short with the hosts getting
settled into the game earlier than their
guests.
UEFA Europa League
@EuropaLeague
Lacazette marks his 50th UEFA club
competition appearance with a goal
Do Arsenal need a second? #UEL
9:33 PM – Apr 26, 2018
518 141 people are talking about this
They controlled most part of the
possession with the Spanish League side
soaking pressure from the advances of
the home team controlling 83% of the
possession as early as the 5th minute of
the game.
Arsene Wenger’s men continued to
pressure their Atletico for an early goal,
but their closest chance at goal came in
the 6th minute with Lacazette’s volley
hitting the woodworks.
Two minutes later, Jan Oblak made his
first save of the game by denying
another Lacazetter’s effort headed for
the net.
Meanwhile, Sime Vrsaljko was given a
marching order in the 10th minute after
receiving a second yellow card for his
dangerous tackle on the Frenchman.
UEFA Europa League
@EuropaLeague
When your hard work is rewarded
How will the second leg go in Madrid? #UEL
10:13 PM – Apr 26, 2018
545 191 people are talking about this
Two minutes later, coach Diego Simeone
was also sent to the stands by the
official after reacting to the red card
Vrsaljko given in the early minutes of
the match.
By the 15th minute, the visitors had
gained more confidence as they
contended with the home team over the
possession of the ball.
In the 21st minute, Jan Oblak made an
impressive save from Danny Welbeck’s
effort to ensure they remain goalless in
the game.
The two teams continued to mount
pressure on themselves in search of the
first goal of the match, but the first 45
minutes ended goalless.
Having rested for 15 minutes, both
teams came back onto the pitch to
resume hostilities for the rest of the
game.
UEFA Europa League
@EuropaLeague
Oblak has handled everything Arsenal have
thrown at him
Will he be beaten tonight? #UEL
8:57 PM – Apr 26, 2018
416 135 people are talking about this
Atletico Madrid, who were coachless for
most part of the game came out of the
tunnel with the intention of breaking
the deadlock in the early minutes of the
second half, but most of their efforts
were either saved by Arsenal
goalkeeper, Ospina or intercepted by
the Gunners’ players.
Oblak dusted Aaron Ramsey’s long
range shot in the 53rd minute, but a
quick attempt by his teammates to
launch a quick attack was intercepted
by Arsenal players.
Arsenal eventually broke the deadlock
in the 61st minute with a fine header
fromm Lacazette through a superb cross
from Wilshere.
The home team grew more in
confidence after the goal as they took
the game to Atletico’s half and played
most part of the game in the opponent’s
half of the field.
UEFA Europa League
@EuropaLeague
Which one of these forwards will be playing
in the #UELfinal ?
10:43 PM – Apr 26, 2018
586 107 people are talking about this
Despite the numerous chances created
by Wenger’s men, most of them failed to
hit the target, a performance that they
got punished for as Griezmann grabbed
an equaliser for the guests late in the
game.
At the end of the game, Arsenal had
eight shots on target while their
opponent had five. Twelve of their shots
at goal went off target while the Spanish
side only had one shot off target.
The Gunners played 11 corners and
Atletico were only able to play one
corner for the entire 90 minutes. 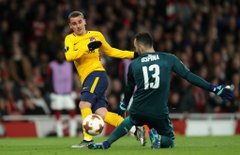 BIAFRA: Starvation of Biafrans was a result to stop the war— DR. Bulama Mali

BIAFRA: The witch-hunt against Chidoka , Abaribe must stop or else—IPOB