Real Madrid are set to be without both Isco
and Dani Carvajal for the second leg of their
Champions League semi-final against Bayern
Munich next Tuesday, coach Zinedine Zidane
confirmed on Friday.
Isco-Zidane
“It is always annoying to lose two players but
there is nothing we can do, that is how it is,”
said Zidane at a press conference ahead of his
side’s home clash with Leganes in La Liga on
Saturday.
Both players came off injured during Real’s 2-1
win in Munich on Wednesday.
Real confirmed that Isco has a shoulder sprain
and right-back Carvajal has an injury to his left
hamstring, although they did not specify how
long either player will be missing.
Nevertheless, Spanish media have ruled them
out of next Tuesday’s second leg against the
Germans at the Santiago Bernabeu.
With Nacho also struggling with a thigh injury,
being without Carvajal would leave Zidane with
problems at right-back, where Lucas Vazquez
finished up Wednesday’s game. 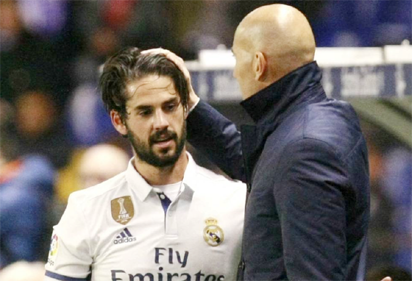