President Trump raised the issue of
persecution of Christians in Nigeria Monday
in an Oval Office meeting with Nigerian
President Muhammadu Buhari, whose
ancestral group is responsible for atrocities.
“We’ve had very serious problems with
Christians who have been murdered, killed in
Nigeria ,” Mr. Trump told reporters, with Mr.
Buhari seated next to him. “We’re going to be
… working on that problem very, very hard
because we can’t allow that to happen.”
While the Muslim extremist group Boko
Haram has received most of the attention in
Nigeria , little notice has been paid to militant
herdsmen of the Fulani people who have
been responsible for killing Christians and
others. Earlier this month, 19 Christians were
killed in an attack.
In the past year, there have reportedly been
more than 600 deaths due to Fulani unrest,
including the burning of churches and homes,
rapes and kidnappings.
The two leaders also discussed efforts to
fight the Islamic State terrorist organization
in Nigeria .
“We have many things that we do together,
as you know, especially on terrorism,
terrorism-related,” Mr. Trump said. “It’s a
hotbed, and we’re going to to be stopping
that.” 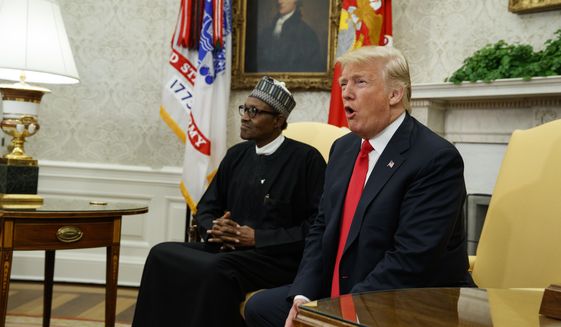 Only 5 from 23 L.G.A in Benue free from herdsmen menace — Ortom stated