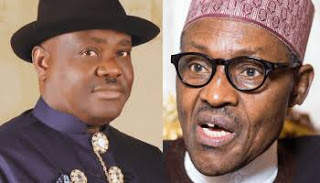 Muhammadu Buhari-led government to shelve any plan of going after him for any reason.
Wike said any attempt to touch him will “finish Nigeria.”
The governor further stated that the Federal Government must apologise to the State and seek God’s forgiveness, or it will have no peace. The Governor spoke yesterday while addressing workers during the Workers’ Day celebration, at the General Yakubu Gowon Stadium, Elekahia, Port, Harcourt.

Wike noted that the country was hunted and bedevilled by killings, because the Federal Government politicised security crisis in Rivers because it is not an All Progressives Congress APC state.
He said, “Don’t just see me as governor of Rivers state; see me as a soldier of God. For those, who are planning against me in Abuja, I say, you will fail. The day you touch Rivers, you finish Nigeria.
“When they tried to compromise security, I told them if Rivers state has a problem and they don’t want to look into it, one day Nigeria will burn. And I told them until they (FG) come and seek forgiveness and tell God ‘we are sorry for what we did to Rivers state’, they will never see peace.
“I asked them to come to our aid and they said it is People’s Democratic Party (PDP) state”.
He added, “Anything you want me to do in the interest of the state, I will do. But, when you introduce politics, I will come out as a politician.
“One thing you must not do to a politician who does not see, hear or talk; don’t bring politics, when you are demanding something.
“Nobody will deny workers their legitimate rights. I will never be in support of that. But, you are doing something wrong by threatening me with strike; that is not democracy.

“The essence of labour is not only to demand rights, you should, also, demand free and fair election. How many times has Labour talked against what is happening in the state? How many times have you condemned the federal government for changing police commissioners from left to centre.
“How many times have you cautioned those insulting Independent National Electoral Commission officials? Labour is not only for increment in wages; it is not only about building secretariat for you, buy buses or generator. Labour is part of talking of survival of democracy in the country.
“During the previous administration, when former president Goodluck Jonathan wanted to remove subsidy from fuel, Labour went on strike. Today, they have removed subsidy Labour failed.

“We all witness what is happening in the country today. Look at the killings. If you talk about the increment of wages and you don’t have children, brothers, sisters, mothers and fathers, then, what is the increment of wages and people are dying everyday? Nobody says anything.
“Talk about how Nigeria will move forward and not only increment. It will come and nobody will stop it.”

Like Loading...
Related ItemsNewsNigeria
← Previous Story What you need to know about Trump stands on Biafra and his meeting with Buhari
Next Story → Buhari Is A Full Brown Failure To Nigerians – Obasanjo Opens Up