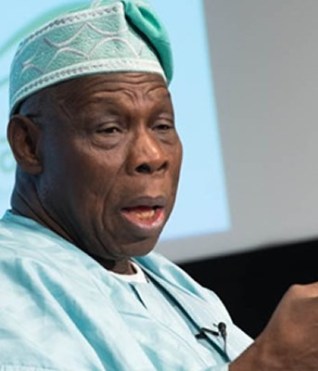 Former President Olusegun Obasanjo has said that Nigeria is now more divided than ever before because the President Buhari led leadership is playing the “ethnic and religious game”, which he described as very unfortunate.”He further revealed said the country is now more insecure and unsafe for everybody.He also criticised the ruling party over its “arrant arrogance,” saying it is “revelling in its unrepentant misgovernance” of the country.The former president said this on Thursday in Abeokuta, Ogun state, when the Coalition of Nigeria Movement (CNM) fused into African Democratic Congress (ADC).In a speech titled ‘My treatise for future of democracy and development in Nigeria’, Obasanjo also criticised the apology issued to Nigerians by the Peoples Democratic Party (PDP).He said: “PDP offered apology without disciplining those who set Nigeria on a course of ruin, and some of them are still holding leadership roles in their party. Nigerians may forgive, but Nigerians should never forget; otherwise, they will be suffering from amnesia, and the same ugliness may raise its head again.“APC, as a political party, is still gloating and reveling in its unrepentant misgovernance of Nigeria and taking Nigerians for fools. There is neither remorse nor appreciation of what they are doing wrong. It is all arrant arrogance and insult upon injury for Nigerians.“Whatever the leadership may personally claim, most Nigerians know that they, Nigerians, are poorer today than when APC came in, and Nigeria is more impoverished with our foreign loan jumping from $3.6 billion to over $18 billion to be paid by the present and future generations of Nigerians.“The country is more divided than ever before because the leadership is playing the ethnic and religious game which is very unfortunate. And the country is more insecure and unsafe for everybody. It is a political party with two classes of membership.“Before I leave this point, it is pertinent to make the point that PDP and APC are not actually made of men and women who are totally evil. There are sprinkles of good men and women out there and among them. But as political parties and the government they led or they are leading in the last 11 years, they have failed, and failure should neither be hoisted for embracement nor reinforced.“What must be done is to take what is best from all to come together on a new alliance platform that will take us to the promised land. There must be basic and fundamental ground for change and for people to change. What is not desirable is to take the leprous hand of either PDP or APC as the instrument to clean Nigeria up.“The clean fingers in either of them can and must be grafted to the clean hands of new entrants and participants to move up and move on, and that is what I understand the reinvigorated party platform is all about – change, new order, and progress. Nigerians must keep their eyes wide open, their ears quite attentive, their minds very clear, their hands very clean and must not remain dumb in the face of atrocities and impunities of the governors against the governed.“Those who govern us at all levels must be made to realise that it is our collective rights and sovereignty that they hold in trust for us and to be used for the good of all of us and with all of us having interest and having a stake in how we are governed. It is our God-given right, and we must not allow the abuse of it.”