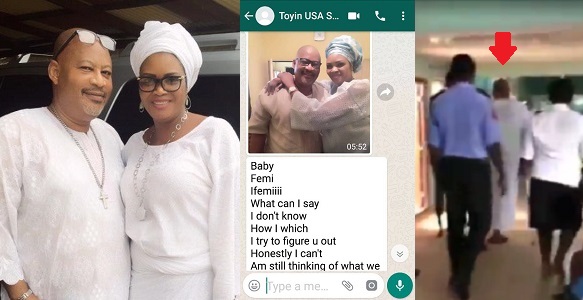 New report has emerged about the woman who parked her car on 3rd Mainland bridge in Lagos and jumped into a Lagoon. According to Nick Sparkles, the woman who committed suicide is based in Texas in the United States and was married with 3 kids..
It was alleged that her husband Tunde works or used to work with Access Bank in Lagos.
The wife allegedly got involved with another guy in Nigeria and they both got involved in series of adulterous activities. Her lover, an older guy as well swindled or collected over N10m from her.
The woman who plunged into the Lagoon and her boyfriend.
She went to arrest him only for him to publish nude pictures of them together in order to prove his innocence to the Police that whatever happened between both of them was consensual, that he’s not a fraudster as claimed by the married woman.

The blackmail from the man got to her husband and this compelled the husband to conduct a DNA test on all his 3 children which later turned out that they are not all his kids after all. (See pictures of her husband & kids here)
Those kids belong to someone else. On Saturday, 9th of June, 2018, the woman drove her truck to the bridge, parked her SUV van on the 3rd Mainland Bridge and jumped inside the lagoon on a suicide mission which is a resultant effect of the blackmail.
An update on the report reveals that her lover who duped her of N10 Million and released her Unclad pictures is currently in the hospital under police custody (as seen in the video below). He is said to have suffered from shock, upon hearing what had happened as a result of his illicit affair.

“God used Mavin singer, Dija to help me when I was really down’ – Uriel

America – Somali Muslims are deported back to Somalia