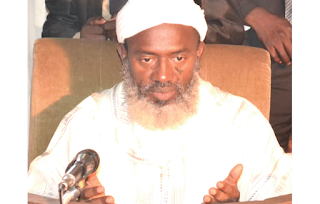 Ahmad Gumi, Kaduna-based radical Islamic cleric, has lambasted President Muhammadu Buhari for killings under his administration.
Advising him to resign, Gumi stated that there was less bloodshed under the government of Goodluck Jonathan.
In his Ramadan tafsir sermon at the weekend, the Islamic leader also recalled his criticism of Jonathan while he was in office.
“Why I blame Jonathan with blood in his hand because Boko Haram were putting bombs everywhere and government was not doing enough”, he said.
“Anybody killed under your regime, you are responsible for that blood. If you have done your best, I can say yes, Allah can forgive you. But if you are relaxed, no; Allah will not forgive you. So it is the same thing now.
“The bloodshed now is more than, combined together, the bloodshed during Jonathan’s regime. So now you judge yourselves to be fair. Our religion is a religion of fairness.
“During Jonathan’s time when the blood was flowing too much — mosques and churches and streets, I said let him resign because I could see he could not handle the blood flow.
“He could not handle it. I said please resign with immediate effect because you cannot handle the killing of innocent people.
“That is why I called for his resignation and government newspaper and others published it. Is that possible today?
“Now more blood is shed from negligence, from sleeping, from laziness, from I-dont-care.
“If I am true to myself, as I called for the resignation of Jonathan, I should call for the resignation of President Buhari, and with immediate effect! And government paper should carried it also, if there is truth.
“As bad as Jonathan was, he was more democratic and had given people freedom to speak — even against him. You could see when he saw there was problem, he relinquished power, saying ‘I don’t want blood to be shed.
“This man (Jonathan) build for us nine universities in the North, more than 150 Almajiri schools. Even this railway from Abuja to Kaduna. He has done a lot of things. But I was charging him because blood; blood is the most expensive thing in life.
“There was nothing I have not said (against Jonathan). He should be impeached, he should resign, he was divisive.
“So now I have one of two options. If I can not tell my own brother what I have told this man, then I should take an aeroplane from Abuja to Jonathan and say please forgive me for castigating you in public.
“I rather seek his apology or castigate the president too. One of the two, there is no three. We have been patient with this government. If it is another, wallahi it would have been more than this.
“People are dying, everyday. Yesterday somebody was kidnapped. People are suffering, and nobody can say it because they have taken over out throats because they don’t want to hear something bad against the man.
“This is a mosque of Tawheed (the concept of monotheism in Islam). Even that is enough reason to show people.
“When people were saying Jesus is God, Allah revealed a verse to dress Jesus down to show him if Allah wanted he could even destroy him.”
The cleric said when people elevate human being to certain level, the person should be addressed to show people that he is human.
“Buhari is full of mistakes. Full of mistakes! He is human being like anybody. And I swear to God that there are many people here in the North that can perform better than him. Better!”

I Have Suffered both in the hands of people I trusted and Fellow Military Men, What have I done wrong? – Buhari Cries Out