INSIDE KANU’S KINGDOM: The unresolved disappearances and untold story of imprisoned IPOB members 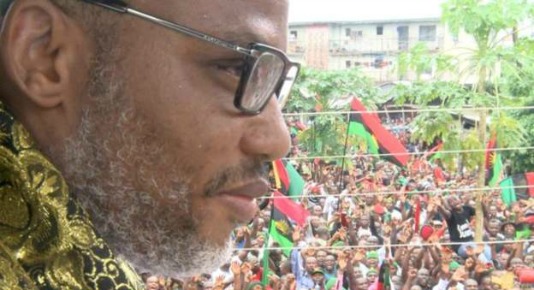 Since September last year, when the Nigerian army launched Operation Python Dance II – a military offensive in the South East region aimed at quelling the growing agitation for an independent Biafran state by the Indigenous Peoples of Biafra (IPOB), the leader of the group, Nnamdi Kanu and his parents were never seen again after a group of soldiers invaded their home.
Also, more than ten IPOB members and supporters were reportedly killed in his compound during the invasion. Many believe Kanu and his parents may have been killed during the invasion and their bodies taken away by the soldiers. In the midst of these developments, the story of a large number of IPOB members who were arrested and imprisoned at Aba federal prisons since last year after the military operation, has never been told.
In this special report, Ripples Nigeria reporter, PATRICK EGWU travels to Kanu’s home town in Isiama, Afarakwu in Umuahia, Abia state to unravel the truth and secret behind Kanu’s disappearance and members of IPOB who are languishing in prison after the military operation.
Inside Afaraukwu kingdom
It was 1:45pm, a sunny afternoon when this reporter arrived Isiama, Afarukwu, Umuahia, Abia state. About 20 meters from the untarred road leading to the house where Kanu once lived, is a security post of a team of armed uniform security men – six of them gazing and surveilling the area close to a waiting pick-up truck.
It is the palace of Eze Isreal Okwu Kanu – Kanu’s father who was until the military invasion, the paramount ruler of the community.
This reporter headed towards the direction of the house. Everywhere was silent aside one or two passersby who walked pretty fast as though someone was coming behind them. Neighbours who live on both sides of the road were either seen going in or coming outside to pick up something.
INSIDE KANUS’ KINGDOM: The unresolved disappearances and untold story of imprisoned IPOB members
Palace of Eze Israel Okwu Kanu…. Where Nnamdi lived before military invasion
This was however, a different scene to what this reporter had experienced in May 2017 when he, alongside some select journalists, visited Kanu for an interview when he was granted bail from prison. Then, the road leading to his compound was very busy like a pilgrimage centre – young men, women adorned in all black ensemble with red berets, keeping guard and hoisting Biafran flags and waiting to have a glimpse of Kanu. Now everywhere seemed deserted, like a graveyard.
Once in front of the tall black gate with barbed wire, this reporter knocked repeatedly. No response. More knocks came afterwards. Ten minutes later, a bearded young man gently opened the gate, peeped and demanded to know who he was looking for.
“Shalom,” he greeted. “Who are you looking for?”, he queried.
After this reporter had introduced himself, he demanded for an ID which was handed to him. “Wait here,” he said, jamming the gate almost immediately. Returning about 5 minutes later, he asked this reporter to come inside.

When this reporter asked him on speculations that Kanu might have ran away, Powerful said “These are lies peddled by Ohaneze Ndigbo and Igbo governors in collaboration with their Fulani masters in order to deflect attention away from the invasion of the home of our leader. We consider these speculations as mere waste of time and a calculated attempt to deceive into the lies the government is feeding them,” he said.
When this reporter further asked him on the allegations that Kanu is in the Biafran struggle through IPOB because he is enriching himself from the funds he is getting from rich Igbo sons and elites, he said “What do you mean by remaining in the struggle? Do you know where he is? Please if you do, tell us. This is the most ridiculous assertion no doubt peddled by those that have been resoundingly defeated by the great movement of IPOB. There is no Igbo man rich enough to fund IPOB and no one has ever contributed funds to IPOB and that is why we are independent,” he said.
“MASSOB is a pro-Biafra group whereas IPOB is the people of Biafra. Between a people and a group who will break away from the other?”, Powerful queried this reporter when asked to comment on stories making the rounds in some quarters that Kanu’s IPOB broke away from the Movement for the Actualization of the Sovereign State of Biafra (MASSOB) led by Ralph Uwazuruike over leadership tussle and betrayal.
“What has money got to do with freedom fighting that every success of IPOB must be equated to some monetary gain or financially rewarding outcome? MASSOB has nothing to do with IPOB. Everybody wants to associate with IPOB because it is the largest, most disciplined freedom fighting outfit in the world,” he said.
Udegbunam further said the clash of superiority and other developments such as mistrust between IPOB and some Igbo political elites who are not in support of the agitation, has polarized membership.
Killed for wearing a Biafran wrist band
On September 12, 2017, Ifechukwu Agbayisi, 35, had just had a nice time with his wife Chizoba and three children. He bade them farewell and set for work in the city of Aba, Abia State, South East Nigeria.
Agbayisi, allegedly shot by a soldier
An hour later, he phoned his wife, that he was heading to Isiama Afaraukwu – Nnamdi Kanu’s home in Umuahia, Abia State. He never returned.
After about 45 minutes later, Chizoba called him to know if he arrived safely but he was not picking up even as the phone rang several times.
“He told me that they were going to Nnamdi Kanu’s house in Umuahia some minutes after he had left the house,” Chizoba said looking downcast. “When I later called him back, he was not picking up his phone and I was surprised and uncomfortable because he doesn’t behave that way,” she said, her eyes fixed on a photograph of her husband wearing Biafran styled hat and muffler.
Chizoba 32, said after she had tried getting through to her husband and was not successful, she became worried and feared that something bad had happened. Still deep in her thoughts, a young lady phoned her to confirm her fears.
“Later a young girl called me and said I should come to a mortuary in Umuahia. We went and shockingly he was the one. The lady told us that some soldiers brought his corpse here and said ‘he’s an Igbo man, keep him here’ and they left with other corpses in their truck,” she said, holding back tears from her eyes.
On September 12, 2017, following the commencement of Operation Python Dance II – a military offensive by the Nigerian military in the South East region, an announcement was aired on Radio Biafra and IPOB’s social media handles that all IPOB and Biafran supporters and sympathizers wherever they are, should head to Kanu’s house to protect him from the military invasion.
Agbayisi alongside others – eighteen of them, who are all members of the IPOB, had heeded to the call. Immediately, they left what they were doing in Aba and headed straight to Umuahia.
Barely 30 minutes on the road, a group of soldiers intercepted their vehicle and asked all of them to alight. In the midst of a stop-and-search operation to see if the group had any Biafran flag or insignia, a wrist band with Biafran colours was found on Agbayisi and a female military officer asked him to remove the wrist band and hand it to her. He refused demanding to know why he should hand her his property.

“What Nigerian government does is to defraud them. The prosecutors from the ministry of justice go to their families, asking them to give them money so they can see what they will do to release them. So if you want to release them from prison why not come to the state High Court and say that you don’t have anything against these people instead of going to their poor parents and start demanding for money. We contribute money and feed them in prison because the food they serve them is very bad. Some of them are ill and they don’t even care,” she said.
She continued: “IPOB is the one taking care of their legal fees and everything. I think we will sue them for this because I can’t understand how people moving from Aba to Umuahia, you ask them to alight from the bus, beat them, force them to drink mud water, kill one of them in their presence and yet charge them for terrorism, kidnapping and what have you.”