Home / News / US, Europe told to impose sanctions on Nigeria over killings of Biafra protesters •No going back on petition to ICC, says HURIWA

US, Europe told to impose sanctions on Nigeria over killings of Biafra protesters •No going back on petition to ICC, says HURIWA 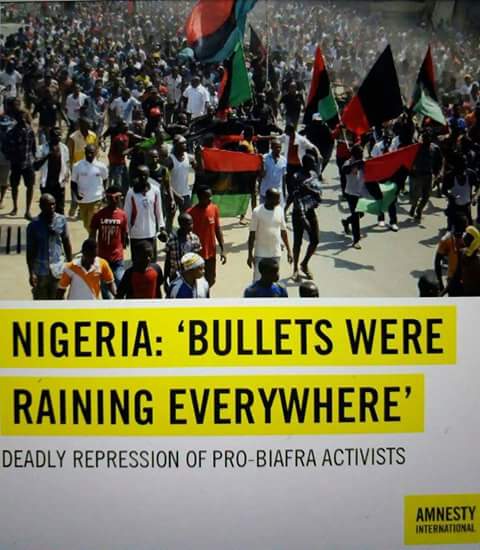 A reputable non-governmental and pro-democracy organization – Human Rights Writers Association of Nigeria (HURIWA) – has asked the United States of America’s government and the European Union to impose sanctions on Nigeria over the spate of killings of civilians by security forces in the last two years ago which are unaccounted for, despite global outcry.
The rights group has also asked the United States Congress to freeze the sale of weapons to Nigeria already approved by President Donald Trump during a recent state visit by the Nigerian President Muhammadu Buhari under whose command and control over a thousand unarmed Igbo demonstrators and sympathisers of the now proscribed Indigenous Peoples of Biafra were mauled to their gruesome deaths by Nigeria Army.

HURIWA also described as strange, the decision by Donald Trump to sell sophisticated weapons to the Nigeria Army who are responsible for the gruesome mass murder of unarmed members of the Shiites Islamic movement and the unjust incarceration of its leader; his wife and hundreds of other members arrested and dumped in detention facilities for demanding the release of their leader who was thrice granted bails by Federal High Court but for which the Nigerian government disrespected.
In a statement by the National Coordinator, Comrade Emmanuel Onwubiko, and the National Media Affairs Director, Miss Zainab Yusuf, HURIWA condemned the inhumane decision by Donald Trump to approve the sale of fighter Jets to the Nigerian government whose security forces killed thousands of Nigerian civilians.
HURIWA asserted that Amnesty International had done highly scientific and evidence-based findings which indicted the Nigeria Army for the extra-legal killings of over 600 demonstrators suspected to be members of Indigenous Peoples of Biafra (IPOB), and over 350 persons belonging to Shiites Islamic Movement who were killed by Army in Zaria over two years ago.
“We are in deep shock that, although, the United States President is aware of all the damaging facts about large-scale extralegal killings that occurred in South East of Nigeria and North West of Nigeria, but still proceeded to okay the sale of the deadly fighter jets to the Nigeria Army whose human rights record is about the worst globally.”

HURIWA recalled that a Frontline rights group, the International Society for Civil Liberties & the Rule of Law (Intersociety) on recently accused the Nigerian Army of illegally killing about 150 pro-Biafra activists last year apart from the number listed by Amnesty International. It alleged that the crime was committed last year and covered up under the blanket of Operation Python Dance II.
“The allegation was contained in a statement signed by Intersociety Board Chairman, Emeka Umeagbalasi, and Head, Civil Liberties & Rule of Law Programme, Barr Obianuju Joy Igboeli,” the group noted.
It said the statement released from the group’s head office in Onitsha, Anambra State, reads: “The combined authorities of the Nigerian Army and the Nigerian Air Force are responsible for the killing of no fewer than 456 defenseless and unarmed citizens of the country in 2017 alone. The killings included jet-bombing of no fewer than 236 Christian IDPs at Rann IDP camp in Kale-Balge LGA of Borno State on 17th January 2017.
“There were also no fewer than 20 supporters of Biafra Indigenous People, shot and killed by soldiers at pro Trump Rally in Port Harcourt on 20th January 2017; no fewer than 50 rural Christians bombed to death in Numan, Adamawa State on 4th December 2017; and no fewer than 150 mainly supporters of Biafra Indigenous People killed on 12th, 13th and 14th of September 2017 in Afara-Ukwu, near Umuahia (105 deaths), Isiala-Ngwa (20 deaths) and Aba (25 deaths). Over 100 unarmed and defenseless others were also shot and wounded particularly in Afara-Ukwu; which witnessed the highest number of injuries and Aba with the second highest number of injuries.
“In 2016, the Nigerian Army, joined by Nigeria Police Force and other security agencies killed no fewer than 200 pro Biafra activists in Aba on 18th and 29th of January and 9th of February (60 deaths including 16 slain bodies dumped in two burrow pits and over ten recovered slain bodies) and 29th and 30th of May 2016 at Nkpor, Onitsha and Asaba (140 deaths with only about 15% bodies of the slain recovered and buried by their families).
“In 2015, the Nigerian Army, joined by Nigeria Police Force and other security agencies killed no fewer than 50 unarmed pro-Biafra campaigners. They were killed at Awka and Onitsha on 30th August; again in Onitsha and Aba on 2nd December and lastly for the year in Onitsha on 17th December at Niger Bridgehead. Out of no fewer than ten killed in Aba on 2nd December 2015 along Aba-Port Harcourt Road, five slain bodies were later dumped inside a burrow pit.
“The remaining number of deaths associated with army massacre of pro-Biafra Campaigners came from other violent crackdowns that greeted their street protests between 2015 and 2016 in Asaba-Delta State, Enugu-Enugu State, Abakiliki and environs-Ebonyi State, Yenogoa-Bayelsa State, Port Harcourt-Rivers State and Uyo-Akwa Ibom State. There are also unreported others technically classified as dark and grey figures of crimes. In the above-highlighted massacre operations, no fewer than 500 were shot and maimed with some crippled for life and a number of others died from injuries sustained.
“The Nigerian Army is also responsible for killing between 12th and 14th of December 2015; of no fewer than 1,000 members of Islamic Movement in Nigeria or IMN. The killings took place in Zaria, Kaduna State during the annual sacred procession of the sect. Subsequent killing by security forces in 2016 and above; of the unarmed Islamic sect members also led to no fewer than 120 deaths.
“There are also other military killings resulting from custody related deaths in Northeast Nigeria. These deaths perpetrated in conflict environment and outside military necessity, clearly constitute war crimes. They include torture-deaths (including starvation and malnutrition) in army detention centers involving hundreds of civilians including newborn and others aged not above five. Among such deaths were 240 deaths recorded in the Giwa Military Barracks in 2016 in Borno State. Statistics relating to these custodial deaths are contained in the reports of Amnesty Int’l including its 2016/2017 and 2018 reports on Nigeria.”
HURIWA said: “We have resolved to dispatch letters directly to the United States Congress to demand for immediate imposition of military sanctions and immediate embargo on proceeding with the military commercial partnership with Nigeria not until the Nigerian state is able to prosecute and punish all the armed operatives responsible for these massive extra-legal killings in the South East and also the killers of Shiites Moslems.”
It endorsed the investigation by the Onitsha based NGO which stated that: “From our findings following several months of investigation, no fewer than 150 pro-Biafra activists and other defenseless members of the public were killed by the Nigerian Army; with 70% of the deaths arising from Afara-Ukwu massacre. In the Afara-Ukwu massacre of 14th September 2017, no fewer than 105 deaths were recorded.

“No fewer than 20 deaths were also recorded at Isiala-Ngwa Army Checkpoint, while 25 others occurred in Aba. The Army massacre operation in Afara-Ukwu; which commenced around 3.26pm of 14th September 2017, resulting in the death of not less than 105 citizens, was executed in less than three hours during which no fewer than 70 others were shot and injured. No single soldier lost his life in the operation. Sixty (60) unarmed citizens including survivors of the massacre and other members of the public were also arrested during and after the massacre and arraigned at Umuahia Magistrate Court on “terrorism charges”. They were later reminded at Aba Prison Custody.
“As it has become the atrocious practice of the Nigerian Army military since mid-2015, approximately 80% of the bodies of those shot and killed in Afara-Ukwu, Isiala-Ngwa and Aba were taken away and dumped in undisclosed locations till date. For instance, days after the Afara-Ukwu massacre, corpses numbering eight were found inside a bush at a location in Umuahia. The dumped dead bodies later identified as supporters of Biafra Indigenous People and its leader, Mr. Nnamdi Kanu by their survivor-colleagues.”
HURIWA said these killings must be accounted for and the mass murderers in military uniforms identified, prosecuted and punished for these crimes against humanity.