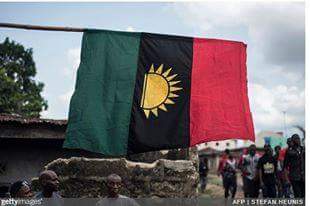 HISTORICALLY, Biafrans are people originated from the nation chosen by God almighty who created heaven and earth and what is there in. Biafra hail from Israel the tribe of Eri descendant of Jacob (Israel) precisely and Israel is the only nation on earth that God choose to establish his covenant with. It was through them that he sent a Saviour to the whole world.
Biafran people left the camp of Israel in the wilderness when the congregation gathered to Aaron the younger brother to Moses with the conspiracy to mould a calf god image that will stand to protect them. As Moses tarried to come down from the mountain where he went up to receive the ten commandments from God that will be guiding the Israelites, while they were journeying from Egypt to Canaan; the land God promised to give them as an inheritance, through their forefathers Abraham, Isaac and Jacob which is today the dwelling place of the nation Israel.
Eri, (Biafrans) left the camp and passed through the deserts of Sahara, down to Ethiopia to settle at Agulu-Eri in the present Anambra state before wider circulation around the entire old eastern region of the contraption called Nigeria.
The land God gave them (Biafrans) is richly endowed with lots of human resources and natural resources, such that other nations are jealous of. When the white men (British) came down to Africa for colonization in 17 and 18 centuries, an illegal amalgamation was made which brought together the Hausa Fulani, Yoruba and Biafrans together to be called Nigeria which has no meaningful meaning apart from Niger area originated from River Niger.

Much efforts has so far being made by the Indigenous People of Biafra to separate themselves from the contraption having ascertained that it can never work again after several exhibition of efforts by them to make it work which failed woefully. But instead of peaceful desolation of the unlawful union through peaceful round table talk or approach enshrined in the international laws and code of conducts, the agitation for Biafra freedom and restoration becomes a call for war in the sight of Nigeria which results in mass decimation of innocent citizens of Biafra.
This has happened in several occasions from 1967-1970 when over 3.5millions of Biafrans majority of women and children were massacred in cold blood by Nigeria government and their foreign allies because they demand for self-determination and self-rule. Also, 1999 – till date is another season of bloodbath in Biafra land as thousands of innocent IPOB who committed no crime but agitating for freedom are being killed by Nigeria security operatives day in day out without any tangible attention or intervention by the international organizations such as AU, EU, UN and USA.

In all of these peril Biafrans are going through in the hands of Nigeria government and their allies, Chukwu-Okike-Abiama (God almighty) has promised to restore Biafra for IPOB but then, the people must be restored for him.
The Indigenous People of Biafra (IPOB) has unanimously achieved more than anticipated in the struggle for Biafra restoration. But one of the major reason it seems Biafra has not been restored to the people, is because the mindset and the attitude of Biafrans need to be restored for good to the glory of Yahweh (God almighty).
It is heart-breaking that in the state of the Biafra conditions yet some citizens of Biafra still engage in illegal killings of their brethren or threatens to kill their flesh and blood for reasons best known to them. Many communities within Biafra territories often engage in communal crisis which often times leads to fatal war that will leave thousands of people dead and create severe wound of hatred and enemies among the two or more persons, communities and states, such as Ebonyi state and Benue state some parts, Ebonyi state and Cross River state some parts, just to mention but few.
Most of these problems and conflicts that arose among Biafrans to kill themselves and create enemies are mostly championed by those who do not want the unity and progress of Biafra as a people and a nation because they know when they do, mighty things will be achieved.

On this note, there is a great need for Biafrans all over the world especially in Biafra land to change their mindset, love themselves more than before and live to please no man but Chukwu-Okike-Abiama, (God almighty) who will give them back Biafra, have a standard value system for these and many more are the things that will convince Yahweh that you’re tired of the sufferings and mayhem Nigeria and British subjected you into and restore your nation Biafra to you. There is no better time to do the needful than now.
May Yahweh bless IPOB!
May Yahweh bless Biafran!
May Yahweh bless and keep
Mazi Nnamdi Kanu and family.
Written by:
Ogeh Friday Igiri
For: Ebonyi State Media