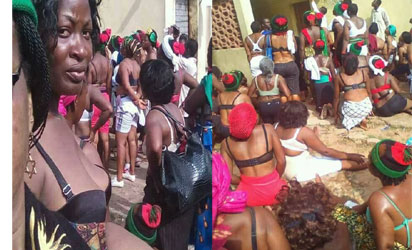 It’s a serious tension erupting the whole of South east and South South as Information reaching our desk room direct from Radio Biafra radio broadcast on the 28/06/2018 which States vividly by these women of Biafra extraction issued fearful ultimatum against the whereabouts of Mazi Nnamdi Kanu.
In this Broadcast, our reporter gathered that this women where very serious and determined asking the Federal Government of Nigeria and their military to urgently produce Nnamdi Kanu within 14days or face mass action from Biafrans. They clearly notified the public, that if their leader is not released under the next 14days Ultimatum, Nigeria Will experience unexpected reactionary act stressed further, that what happened in the year 1929 will be a child’s play to what will become of Nigeria and those that invaded IPOB leader’s Residence in Afara-Uku Ibekwu, Abia State.
Furthermore, these women where provoked to storm Radio broadcast airspace to unveil their anger to the world over the sudden disappearance of NNAMDI Kanu.
Details coming Soon…..
-Eco City News Online

We're Coming For You This Time Around, We Won't Telorate any Fulani Herdsmen Killings in Nigeria Again – UN Blows Hot