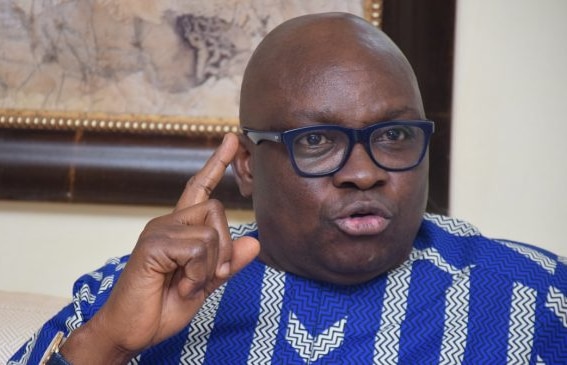 Ayodele Fayose, Governor of Ekiti state, has mocked President Muhammadu Buhari over his age following the visit of President Emmanuel Macron of France.
Fayose made the remarks at a Peoples Democratic Party (PDP) rally in Ado Ekiti on Thursday, while commenting on Macron’s visit to Nigeria.
Fayose said Nigerians deserve a younger president.
“We are having these problems in our country because an old man is our president. When I saw the picture of President Buhari and the president of France, I said ‘Oh my God’,” he said.
“This country does not deserve to be led by an old man.”
Fayose also said he had been asked to come out to receive Buhari who is expected in the state on Tuesday but that he would not do so.
“I got a letter yesterday, they said I should come and receive Mr. President because he is coming on the 10th. But I’m not coming. Receive him for what? I cannot receive him.
The president has not done 100 metres of road in Ekiti,” he said.
“They said I should tell director of SSS to come to Abuja, the director that is Kayode Fayemi’s friend, what is my business with that?”

The governor also accused the federal government of closing nearby Akure airport in Ondo state so PDP leaders would not be able to attend the party’s rally in Ekiti.
“I want to condemn the federal government here today,” he said.
“Whosoever has taken that action is very shameful. That’s not the spirit of democracy.
Why did you close the Akure airport today? You closed Akure airport so that our leaders will not come to this rally.
Today, we are now landing at Ilorin and Ibadan. That is not patriotic. That’s shameful and unleader-like.”
Fayose also attacked the Independent National Electoral Commission (INEC).
INEC, Fayose alleged, is planning to rig the July 14 governorship election in favour of the All Progressives Congress (APC).
“INEC wants to rig for APC,” he said. “We know your plans.

We know how you are planning to release ballot papers to the APC. We know what they are planning in Ondo and Kogi states. Ekiti is a no go area.”
Urging his supporters to shun violence, Fayose however urged them not to be intimidated.
“If you think you will come and use police to intimidate us, we will follow you bumper to bumper. Since Monday, they’ve been arresting PDP people. I want to tell you my people, I don’t want us to join them violence for violence. The most important day is on the 14th, don’t allow them to provoke us. We must be prepared for this electio

Facebook Comments
Loading...
Related ItemsNewsNigeria
← Previous Story You Are A Betrayal To You're People- Femi Fani-kayode Blasts Femi Adesina
Next Story → DANGER; Archbishop Chukwuma Warned That Aso Rock Will Be A Living Hell For Buhari Within 72hr And He Will Lose In 2019