Home / News / DANGER; Archbishop Chukwuma Warned That Aso Rock Will Be A Living Hell For Buhari Within 72hr And He Will Lose In 2019

DANGER; Archbishop Chukwuma Warned That Aso Rock Will Be A Living Hell For Buhari Within 72hr And He Will Lose In 2019 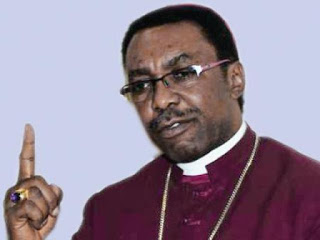 Archbishop of Enugu Ecclesiastical Provence, Church of Nigeria, Anglican Communion, Dr. Emmanuel Chukwuma has declared that God will not give victory to President Mohammed Buhari in 2019.
The cleric also asked Buhari to ensure that Leah Sharibu was released immediately, warning that Aso Rock would be a living hell for him and his family if the schoolgirl remained in Boko Haram captivity.
Archbishop Chukwuma spoke Friday while delivering his national address at the first session of the seventeenth synod of the Diocese of Enugu.
He condemned the federal government for pretending to fight corruption and insincerity in the handling of the murderous fulani herdsmen that have killed and destroyed many communities.

Chukwuma said that Buhari’s body language and actions recently showed that he wants to recontest for the presidential seat but “I can tell you that God will not allow him.”
The cleric who said that the Service Chiefs in the country were over due for change accused the President of retaining them because of his 2019 agenda.
His words: “We know that why he has refused to relieve the service chiefs of their positions is because he has a hidden agenda”.
On the Leah Sharibu, the Archbishop said it was unjust and smacks of politics for the federal government to have kept quiet over the matter because she is a Christian.
He said, “I am given Buhari ultimatum for 72hours in this synod if the Dapchi girl is not released the Ask Rock will be in trouble let them go and note it.
“We are told that she was held back because she refused to renounced her Christian Faith, may the Lord deliver from their captive in Jesus Name if not let the Aso Rock be on fire.”